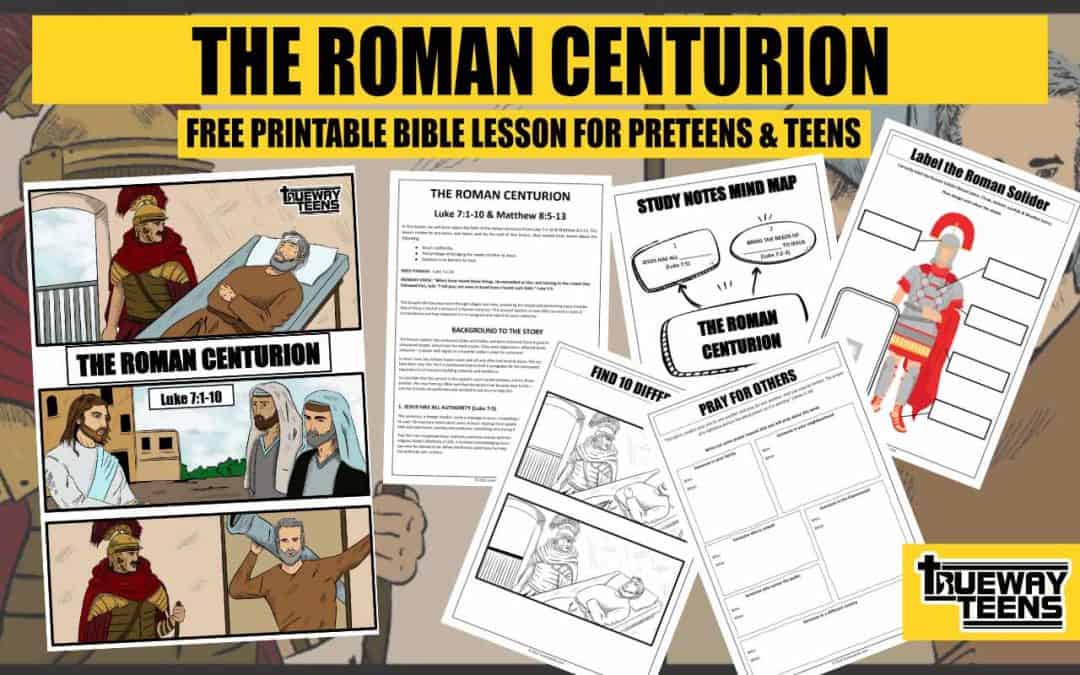 In this lesson, we will learn about the faith of the roman centurion from Luke 7:1-10 & Matthew 8:5-13. This lesson relates to pre-teens and teens, and by the end of this lesson, they should have learnt about the following:

MEMORY VERSE: “When Jesus heard these things, He marvelled at him, and turning to the crowd that followed him, said, “I tell you, not even in Israel have I found such faith.” Luke 7:9.

The Gospels tell how Jesus went through villages and cities, preaching the Gospel and performing many miracles. One of these is that of a servant of a Roman centurion. This account teaches us how faith can work in spite of circumstances and how important it is to recognize and submit to Jesus’ authority.

The Roman soldiers had conquered Judea and Galilee and were stationed there to guarantee order, rule the conquered people, and protect the trade routes. They were organized in different levels, one of which was the centurion—a leader with eighty to a hundred soldiers under his command.

In Jesus’ time, the military leaders were well off and often had several slaves. The centurion in this passage must have been very rich, for it is mentioned that he built a synagogue for the townspeople (Luke 7:4). Such construction required a lot of money in building materials and workforce.

It is possible that this servant is the captain’s most trusted steward, and his illness has affected him in one way or another. We now from our Bible text that the servant had become dear to him. He had no doubt heard about Jesus and the miracles He performed and decided to ask Jesus to help him.

This centurion, a foreign invader, sends a message to Jesus, a travelling rabbi, who he believes as an authority above his own. He may have heard about some of Jesus’ healings from people. But recognizing Jesus’ authority requires faith and submission, humility and meekness, something rare among the people of that time and ours.

That this man recognized Jesus’ authority contrasts sharply with the questioning Jesus received from the Jewish religious leaders (Matthew 21:23). It involved acknowledging Jesus as Lord. This centurion was convinced that Jesus was who He claimed to be. When the Roman asked Jesus for help, it expressed his faith in Jesus. He believed Jesus had authority over sickness.

From the start of His ministry, Jesus demonstrated that He had complete authority. He showed His authority over evil, sickness, nature, and sin. He spoke and taught as one with authority, yet many in Jesus’ day missed it. This Roman Centurion did not. Do you recognize Jesus’s authority? Do you recognize Him as Lord over your life?

It is striking that the centurion asks Jesus for the health of his servant. He was not asking for healing for himself or a loved member of his family. He had the opportunity to talk to Jesus about anything. Many of his peers would have ignored the servant and let him die. He likely had several servants at his disposal. Others might have seen an unwell servant as worthless and quickly replaced them.

How wonderful it is to see when someone cares for another person’s needs! This centurion kept some biblical principles that are still rare in many people today. We may claim to love others, but our actions often speak differently.

The Bible tells us that we ought to pray for one another (Galatians 6:2 & James 5:16). Yet we quickly forget to care for the sick or to pray to God for the needy. This man was different. He cared for the health of his servant and brought the need of another to Jesus.

His example should inspire and motivate us as Christians to care for the sick and pray for those who are going through illnesses or challenging circumstances. Sometimes it is difficult to know what to pray. We often have good intentions but do not have time or forget. This centurion sets us an example to pray for others and bring their needs to Jesus. Who are some people you can pray for today?

Faith is a complete trust or confidence in someone or something. Hebrews 11:1 says, ‘Now faith is confidence in what we hope for and assurance about what we do not see.’

Luke (Luke 7:9) and Matthew (Matthew 8:10) use the words “marvelled” or “amazed” to describe Jesus’ response to the centurion’s faith. The centurion was not the obvious person to amaze Jesus with their faith. He was a warrior from a pagan land. He would have distinguished himself above other soldiers through his brutal acts of war.

The centurion’s position in the Roman army placed him within the ranks of a chain of command. He was under the authority of others but also responsible for directing those under his authority. If the centurion was given an order, he commanded those under him to carry it out; with that command came the power and resources to complete the task.

The centurion realized that God’s kingdom was also structured with a chain of command. Jesus has all power and authority. On this basis, the centurion knew that the sick servant would be healed immediately upon Jesus’ authoritative command—whether given in person or from a distance. The Roman recognized that Jesus had such power and authority over sicknesses that it was enough to say the word, and his servant would be healed.

Such a statement can only come from faith.

The Roman centurion’s faith allowed him to believe that the word of Jesus would be fulfilled wherever He was. He believed that it was a word with authority, and that Jesus’s will would be carried out at the very moment it was pronounced. He believed that there was no distance great enough to prevent its fulfilment. He was confident that Jesus had the authority to command healing and the power to do it.

Many times, our faith fails due to circumstances. We think that distance or timing limit God. We are like Mary and Martha, who had faith that Jesus could have helped Lazarus but at a different time or place.

God is Almighty. He is beyond time and space, so He knows no limits. He is omnipotent. He can do whatever He wills at the precise instant He wills, whenever He wills and however He wills. There is no one in all creation to stop Him or question Him.

As we read the Bible, we realize that much of Israel trusted in God, but they limited their presence to the Temple. Many of the captives in Babylon doubted that God would intervene on their behalf because they were far from the Temple.

There are times when we might feel that we must be near someone to pray for them or that we must be inside a church building for God to answer our prayers. This simply is not true. Distance is no barrier to God. We can call out to Him wherever we are, and He hears us.

The account of Jesus and the Roman centurion is an essential reminder that Jesus has all power and authority. As Christians, we should seek to increase our faith and trust in Him daily. Let us make it our daily goal to seek more of God, to go deeper into His Word and to develop certainty and hope that God will do everything according to His purpose and perfect will.

YOUTH GAMES AND ACTIVITIES FOR THE ROMAN CENTURION

PRAY FOR ONE ANOTHER

THE ROMAN CENTURION – Baby and toddler, preschool and 5+ lesson