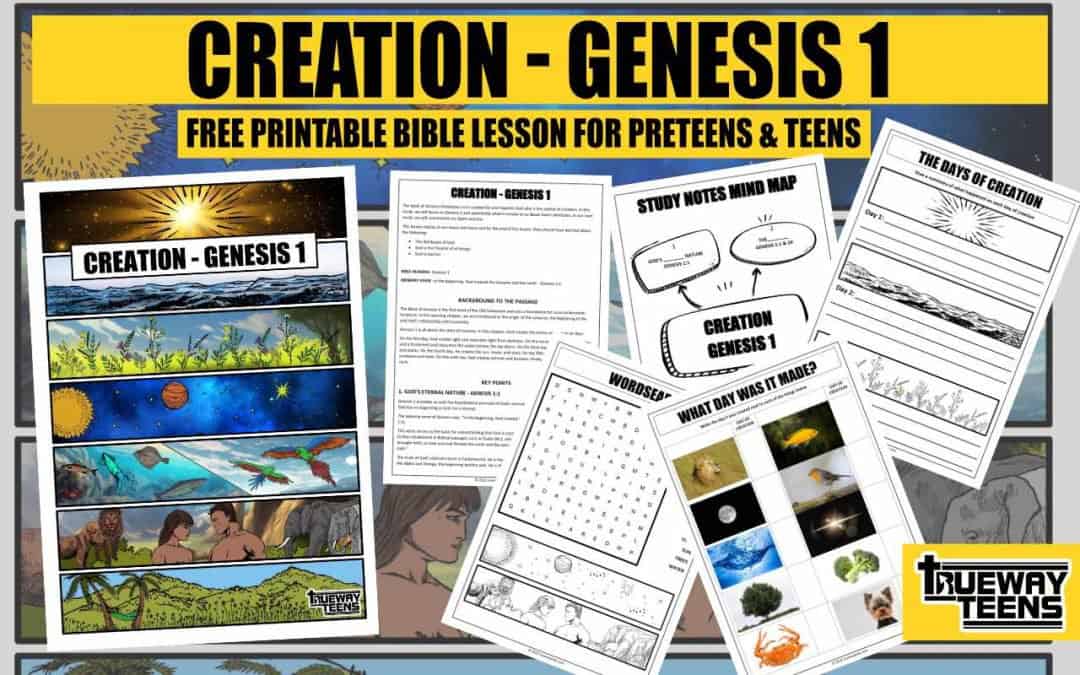 The book of Genesis introduces us to a powerful and majestic God who is the author of creation. In this study, we will focus on Genesis 1 and specifically what it reveals to us about God’s attributes. In our next study, we will concentrate on Adam and Eve.

This lesson relates to pre-teens and teens and by the end of this lesson, they should have learned about the following:

MEMORY VERSE: In the beginning, God created the heavens and the earth – Genesis 1:1.

BACKGROUND TO THE PASSAGE

The Book of Genesis is the first book of the Old Testament and sets a foundation for us to understand Scripture. In this opening chapter, we are introduced to the origin of the universe, the beginning of life, and God’s relationship with humanity.

Genesis 1 is all about the story of creation. In this chapter, God creates the entire universe in six days.

Genesis 1 provides us with the foundational principle of God’s eternal nature. This chapter reveals that God has no beginning or end. He is eternal.

The opening verse of Genesis says, “In the beginning, God created the heavens and the Earth” (Genesis 1:1).

This verse serves as the basis for understanding that God is outside the realm of time. God’s eternity is further established in Biblical passages such as Psalm 90:2, which states, “Before the mountains were brought forth, or ever you had formed the earth and the world, from everlasting to everlasting you are God.”.

The truth of God’s eternal nature is fundamental. He is the source of all life, power, and knowledge. God is the Alpha and Omega, the beginning and the end. He is the same yesterday, today, and forever. The Lord is the source of all creation and sustains all life. He is the first and the last, the eternal God who was and is and is to come. His power and authority are infinite, and He will reign forever.

Genesis 1 introduces us to the Trinity. It reveals the three divine persons of the Godhead—the Father, Son, and Holy Spirit—each distinct and yet unified. In this chapter, the Father is seen creating through the word of the Son (see also John 1). The Spirit is seen hovering over the waters and bringing order to God’s creation. Consequently, this passage highlights the idea that the three persons of the Godhead are co-equal, co-eternal and all involved in the creative process.

Genesis 1:1-2 indicates that God is a single being with three distinct persons in that it says, “In the beginning, God created the heavens and the earth. Now the earth was formless and empty, darkness was over the surface of the deep, and the Spirit of God was hovering over the waters.” Here we see that the Spirit of God was distinct from God, yet still God.

This truth can be seen again in the phrase “Let us” in Genesis 1:26. The term is used to refer to the three members of the Trinity, indicating that all three were involved in the creation of the world.

Genesis 1 is a powerful introduction to the Godhead’s power and unity. Each member of the Godhead plays an essential role in creation and are all seen as equally working together in perfect unity and harmony, creating a world of beauty and order.

The Bible tells us that after each day of creation, God surveyed all that had been made and declared that it was “good.” This is an important reminder that God views creation as a thing of beauty, something to be treasured and not taken for granted. It is an invitation to pause, take a deep breath, and take in all that He has made.

God’s design for creation is awe-inspiring. The beauty and complexity of it can be seen in the smallest of details, like the way a flower blooms to the grandeur of a mountain range.

God’s creation is truly breath-taking. His masterful artistic touch is evident in the infinite variety of shapes, sizes, and colours that make up the world around us. From the vastness of the night sky to the delicate intricacy of a snowflake, His work is a testament to His majestic creativity. From the rainbow of colours in a flower to the complexity of the human eye, God has demonstrated an incredible attention to detail. He has crafted an incredibly diverse and vibrant world full of wonder and beauty.

Today, we live in a fallen world affected by sin, disease, man’s pollutions, and mistakes, yet God’s creation is still outstanding. Imagine at the beginning.

Everything God makes is good because ‘He is good’ (Psalm 103:8). God is the source of all that is good, and He is constantly at work in the world to bring about His good and perfect will.

In Genesis, God is seen as omnipotent, omniscient, and omnipresent.

As omnipotent, God is shown as having absolute power and control over all existence. This means that God has unlimited power and is capable of anything. Only an omnipotent God can create something out of nothing.

As omniscient, God knows all things; past, present, and future. His omniscience is seen in the complexity of the universe, from the galaxies billions of light years away to the smallest of creatures living in the depths of the oceans. The intricacies of creation demonstrate God’s infinite wisdom. At creation, God created plants to be used as medicines for sickness that didn’t exist for thousands of years. The complexity and order of creation is a reminder of God’s perfect knowledge.

As omnipresent, God is shown outside of the laws of time and space. Put simply. This means that God is everywhere and is present in all things (read Psalm 139:7-12).

In conclusion, Genesis 1 reveals to us an eternal God who is all-powerful, all-knowing, and ever-present. His divine nature is expressed in His creation. He brings order and beauty to the world, and into our lives. He is the Creator of all things, and He is perfectly good.