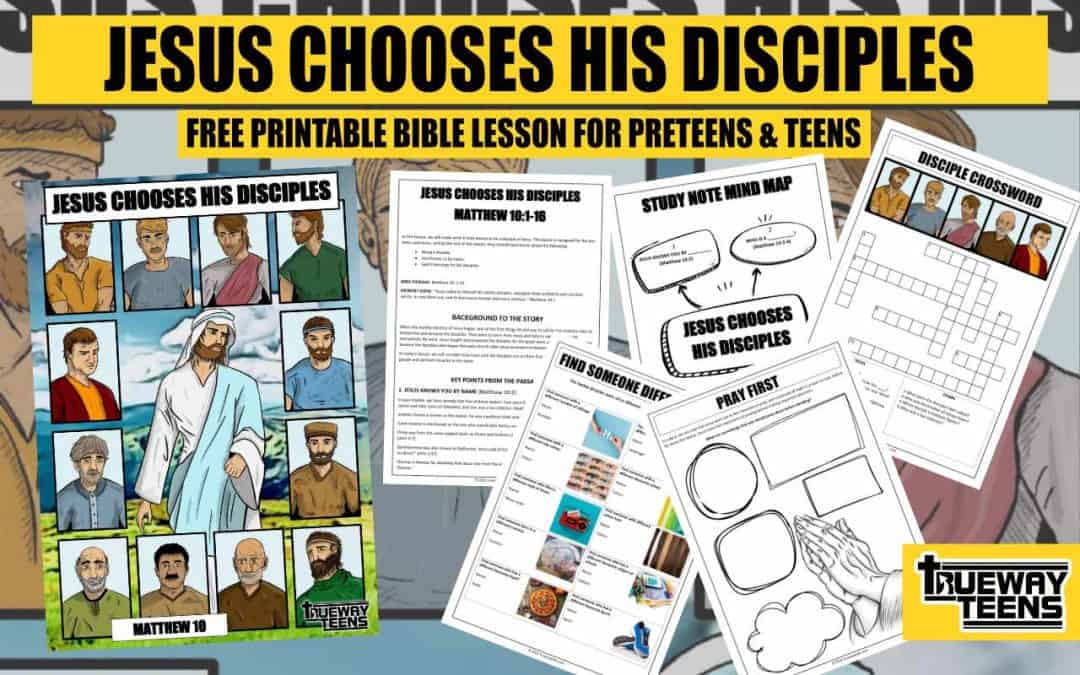 In this lesson, we will study what it truly means to be a disciple of Jesus. This lesson is designed for the pre-teens and teens, and by the end of this lesson, they should have learnt about the following:

MEMORY VERSE: “Jesus called to Himself His twelve disciples, and gave them authority over unclean spirits, to cast them out, and to heal every disease and every sickness.” Matthew 10:1

When the earthly ministry of Jesus began, one of the first things He did was to call twelve ordinary men to follow Him and become His disciples. They were to learn from Jesus and help to spread the gospel everywhere He went. Jesus taught and prepared the disciples for the great work ahead. The disciples later became the Apostles who began the early church after Jesus ascended to heaven.

In today’s lesson, we will consider how Jesus sent His disciples out on their first mission to proclaim the gospel and perform miracles in His name.

In past studies, we have already met five of these twelve: Four were fishermen–Simon Peter, Andrew, James and John (sons of Zebedee), and one was a tax collector, Matthew, also known as Levi.

Another Simon is known as the Zealot. He was a political rebel and freedom fighter against Roman rule.

Judas Iscariot is mentioned as the one who would later betray Jesus.

Philip was from the same seaport town as Simon and Andrew (John 1:44) and was good in mathematics (John 6:7).

Bartholomew was also known as Nathanael. Jesus said of him, “Here truly is an Israelite in whom there is no deceit” (John 1:47).

Thomas is famous for doubting that Jesus rose from the dead. He became known in history as “doubting Thomas.”

We also meet James son of Alphaeus, and Thaddaeus whom we know very little about.

The twelve disciples of Jesus are all together for the first time in the Bible text for this lesson. After spending time in prayer, Jesus calls His disciples. The names of the twelve are mentioned one by one. This shows us that Jesus did not just generalize them. He knew them all by name. He knew their background, pains, strengths, weaknesses, and fears.

Even with the billions of people on earth today, Jesus has not changed. He still knows you by name. Don’t get lost among people around you and think God does not know you personally. He created you (Psalm 139:13-14), knows the number of hairs on your head (Luke 12:6-7) and wants to have a personal relationship with you.

You may feel insignificant. But God knows you, entirely and perfectly. He knows you much better than you know yourself. He loves you deeply.

The word ‘disciple’ comes from Latin, meaning “pupil” or “learner.” When Jesus called the first disciples, He said, “Follow me”. A disciple is a follower who learns from a master. Everywhere Jesus went, His disciples would be close by learning from Jesus and becoming more like Him.

The word disciple occurs 269 times in the New Testament, while the word Christian only occurs three times. In Acts, we read, “The disciples were called Christians first at Antioch” (Acts 11:26). This shows the two words disciple and Christian are interchangeable.

Jesus called the disciples and sent them out to further His work. Interestingly, the name ‘Apostle’ by which the disciples were later known means ‘one sent on a mission.’

Jesus told the disciples; where to go, what to do and what to say. The disciples had clear instructions to follow and obey.

Likewise, Jesus sends us out as His disciples with clear instructions. “Go therefore and make disciples of all the nations, baptizing them in the name of the Father and of the Son and of the Holy Spirit, teaching them to observe all things that I have commanded you” (Matthew 28:19–20).

Jesus sends us out to be His witnesses. We are not only ‘sent out’ while on a short-term mission trip or a ‘gap year’, but we are to be Jesus’ ambassadors every day. At home, at school, at our sports club, at work – everywhere!

Jesus taught that the disciples should expect God to meet their needs. Jesus told the disciples not to acquire extra money for their journey or fill a bag with supplies. They weren’t even to take extra clothing. They were to trust in God’s provision.

Further, Jesus commanded them, “Freely you have received; freely give.”

When God calls us to do something, we often respond with a list of obstacles. “I would obey if only… I had more money, more time or a qualification. We use what we don’t have as an excuse to disobey. Jesus is teaching an important truth. If we have Jesus, we have everything we need!

Jesus wants His disciples to focus on the job He has given and get on with it. There is nothing wrong with preparing for a task, but we must never use it as an excuse not to trust in God’s providence. We must learn to rely upon Him wholly. Now is the time to obey.

In conclusion, review the following points from the lesson and pray to finish up the lesson.

YOUTH GAMES AND ACTIVITIES FOR JESUS CHOOSES HIS DISCIPLES

I KNOW YOUR NAME

JESUS CHOOSES HIS DISCIPLES – Baby and toddler, preschool and 5+ lesson