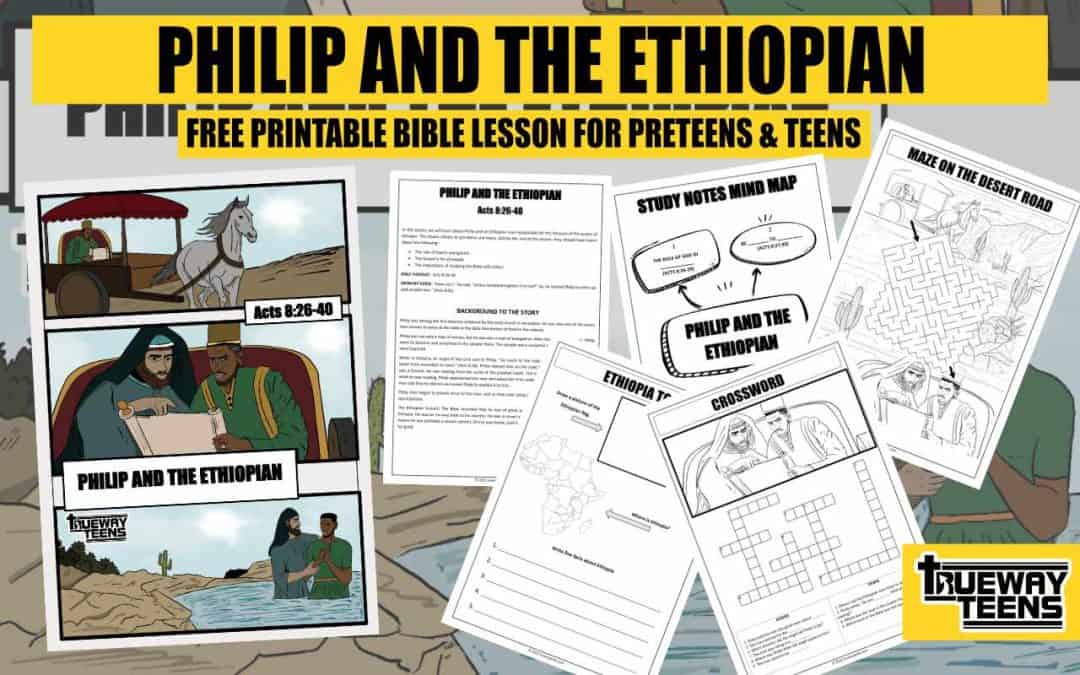 In this lesson, we will learn about Philip and an Ethiopian man responsible for the treasury of the queen of Ethiopia. This lesson relates to pre-teens and teens, and by the end of this lesson, they should have learnt about the following:

PHILIP AND THE ETHIOPIAN pdf – preteen and teen Bible lesson

Philip was among the first deacons ordained by the early church in Jerusalem. He was also one of the seven men chosen to serve at the table in the daily distribution of food to the widows.

Philip was not only a man of service, but he was also a man of evangelism. After the death of Stephen, Philip went to Samaria and preached to the people there. The people were receptive to his message, and many were baptized.

While in Samaria, an angel of the Lord said to Philip, “Go south to the road—the desert road—that goes down from Jerusalem to Gaza.” (Acts 8:26). Philip obeyed and, on the road, he saw a man of Ethiopia who was a Eunuch. He was reading from the scroll of the prophet Isaiah. The man was not able to understand what he was reading. Philip approached the man and asked him if he understood what he was reading. The man said that he did not and asked Philip to explain it to him.

Philip then began to preach Jesus to the man, and as they rode along in the chariot, the man believed and was baptized.

The Ethiopian Eunuch: The Bible recorded that he was of great authority under Candace, the queen of Ethiopia. He was on his way back to his country. He was in Israel to worship the Lord at the temple, which means he was probably a Jewish convert. On his way home, God had a plan to encounter and change his life for good.

As Christians, we are called to be witnesses for Christ in the world. But what is the role of God in evangelism? Is it simply for us to go out, do our best and share the Gospel, or is He actively involved in the process?

The answer, of course, is that God is actively involved in evangelism. He is the one who calls people to Himself, and He is the one who opens hearts and minds to the gospel message. The Bible says, “No one can come to Me unless the Father who sent Me draws him, and I will raise him up at the last day” (John 6:44).

As we share the Gospel, we rely on the power of the Holy Spirit to work in the hearts of those we are sharing with. Let us remember that God is at work in the process. He is the one who calls people to Himself.

While our job is to plan evangelism, God plans the Salvation of people. God instructed Philip to arise so that he could meet with the Eunuch. Also, the Bible says, “Then the Spirit said to Philip, “Go near and overtake this chariot” (Acts 8:29). At first, it was an angel of the Lord, and later, it was the Spirit of God. These were God’s interventions in the evangelism and Salvation of the Ethiopian Eunuch. Without His intervention at these strategic times and locations, Philip would likely have remained in Samaria.

When we are told to do something, it is best to obey quickly. This is especially true when it comes to obeying God. When we hesitate or procrastinate in obeying God, we either miss out on God’s best or delay the inevitable.

When the angel of the Lord spoke to Philip to arise and go towards the south along the road down from Jerusalem to Gaza, the Bible says that ”he arose and went.”

Philip could have given a list of reasons why it made more sense for him to remain in Samaria, where people were responding to the Gospel, than to walk on a desert road, but instead, he simply obeyed.

Our human nature is to procrastinate or rationalize, but God’s Spirit gives us the power to act. We must submit to God and obey His commands; Psalm 119:60 says, “I hurry and do not delay to keep your commands.” When we are quick to obey, it shows that we trust and respect God.

Sometimes we may not know why God is asking us to do something, but we can trust that He knows what He’s doing. Proverbs 3:5-6 says, “Trust in the Lord with all your heart and lean not on your own understanding; in all your ways submit to Him, and He will make your paths straight.”

Philip was quick to obey God. He didn’t doubt the incomplete instruction; instead, he obeyed. How many opportunities have we missed because we fail to act on God’s instruction and nudging?

Again, when the Spirit of God spoke to him, he obeyed and heard the man reading the scriptures. He was able to listen to the instructions and act on them. He was in tune with God’s will and acted in obedience.

The Gospel is for everyone regardless of their background, position, or beliefs. We can sometimes think people are too far from God, too sinful, or already belong to another religion or belief system.

On the other hand, we might view others as not in need of the Gospel. They are wealthy, respected, and good by the world’s standards.

Yet these views are not Biblical. The Ethiopian man was a Royal official with a high rank. He belonged to another culture but responded to the Gospel and Salvation. The Gospel does not have a bias toward personality or status. The Gospel is not only for the poor or the wealthy; the Gospel is for all! The Gospel must be preached to everyone, regardless of status, race, tribe, position, colour, or language. We must take the Gospel everywhere and preach it to everyone.

When it comes to understanding the Bible, there is no shame in admitting that you need help. The Bible is a complex book with a lot of history and context, and it can be challenging to understand everything that is going on and apply it.

The Ethiopian Eunuch was reading a portion of the book of Isaiah but couldn’t understand what it meant. This powerful man was not ashamed to say, “How can I,” he said, “unless someone explains it to me?” and to ask Philip for help.

There are many resources available, both online and offline, that can help you to understand the Bible better. (e.g., books, commentaries, and devotionals). But one of the best things you can do is seek help from others. Ask your pastor or parent, join a Bible study group, and discuss a passage with a friend.

Likewise, we should be quick to help others understand the Bible. Philip didn’t miss the opportunity to preach Jesus to him. The Ethiopian man believed and was saved.

Pray and ask God to give you wisdom and understanding as you help others to grow in their faith.

The Gospel is a message of hope for all people. God gives us plenty of opportunities to share the Gospel with others. We should be quick to obey and help others to understand the Bible and the message of Salvation.

YOUTH GAMES AND ACTIVITIES FOR PHILIP AND THE ETHIOPIAN

PHILIP AND THE ETHIOPIAN pdf – preteen and teen Bible lesson

PHILIP AND THE ETHIOPIAN – Baby and toddler, preschool and 5+ lesson