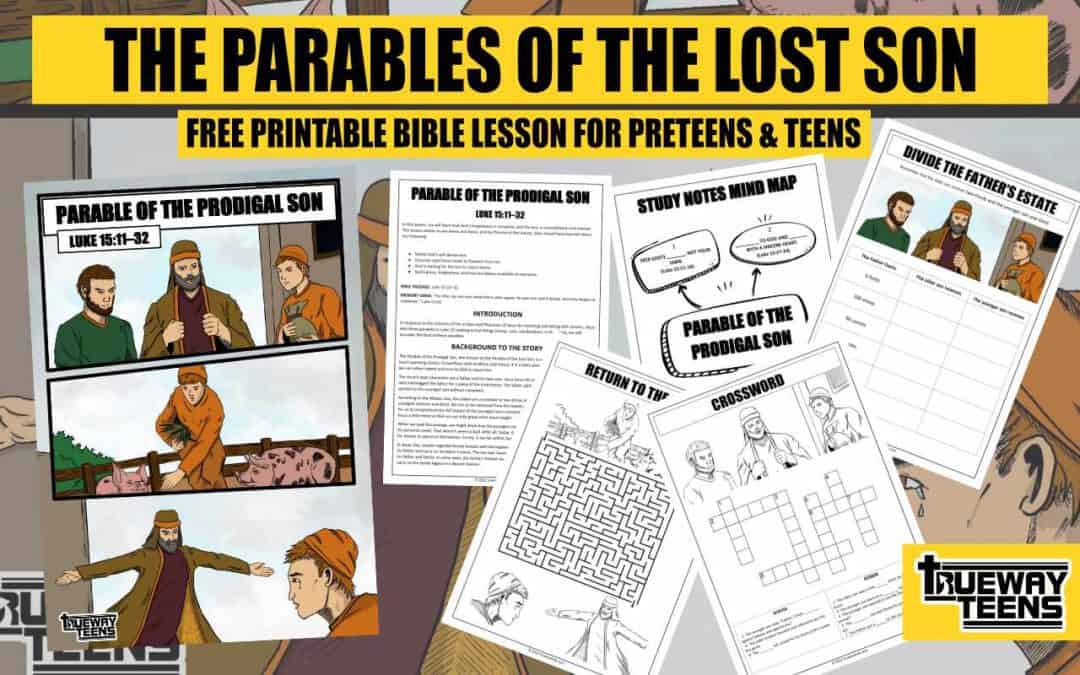 In this lesson, we will learn that God’s forgiveness is complete, and His love is unconditional and eternal. This lesson relates to pre-teens and teens, and by the end of this lesson, they should have learned about the following:

MEMORY VERSE: “For this, my son was dead and is alive again; he was lost and is found. And they began to celebrate.” Luke 15:24

In response to the criticism of the scribes and Pharisees of Jesus for receiving and eating with sinners, Jesus tells three parables in Luke 15 relating to lost things (sheep, coin, son/brother). In this study, we will consider the final of these parables.

The Parable of the Prodigal Son, also known as the Parable of the Lost Son, is one of the most beautiful and heart-warming stories. It overflows with kindness and mercy. It is a story about how God sees us and how we can either repent and turn to God or reject Him.

According to the Mosaic Law, the oldest son is entitled to two-thirds of his father’s fortune, while the youngest receives one-third. We are so far removed from the Jewish culture of those days that it is difficult for us to comprehend the full impact of the youngest son’s conduct. It is worthwhile to take the time to focus a little more so that we can fully grasp what Jesus taught.

When we read this passage, we might think that the youngest son simply begged his parents for money for his personal needs. That doesn’t seem so bad. After all, today, it’s normal for children to ask their parents for money to spend on themselves. Surely, it can be selfish, but it isn’t the end of the world.

In Jesus’ day, people regarded family honour with the highest respect. Every son was supposed to honour his father and carry on his father’s name. The son was viewed not as an individual but as an extension of his father and family. In some ways, the family’s honour lay on the son’s shoulders; he had an obligation to carry on the family legacy in a decent manner.

Usually, the father’s inheritance would be divided among his sons following his death. When the youngest son requested his father for his share, he effectively said, “I wish you were dead!”

The son then brought further disgrace upon himself by selling his half of the inheritance. The inheritance included all of the family’s land, animals, and other valuables. Back then, although a son could be assigned responsibility for his portion of the inheritance, the proceeds were still paid to the father while he was alive. What the younger son did, was sell off his father’s investments and pension, which would have taken care of him in his old age.

In the view of Jews, what the younger son did would be unimaginable. It was a rejection of the entire family lineage (past, present, and future) for his own selfish desires. Such disgrace would have infuriated Jesus’ audience and clearly violated the fifth commandment to “Honour your father and your mother”.

Over time, the son spent all his money and found himself penniless. His extravagant lifestyle reduced him to feeding unclean animals.

He began to reflect on his condition after seeing that the animals he fed ate better than he did. The son came to his senses and knew he couldn’t go on like this. He understands that he must return home.

The prodigal son puts his own will first in order to satisfy his own selfish cravings. His father allowed him to choose his own path.

We must remember that God’s ways are right, good, and beneficial. When we leave the Father’s protective care, we are on the road to ruin. When we do what we want, we become slaves to our sins and live in filth, just like the prodigal son. When we achieve what we want, we may feel content for a moment; but the satisfaction is fleeting, and emptiness creeps into our hearts while we search for the next big thing. Can you remember when you really wanted something but soon lost interest in it? Our best desires are always God’s second-best for us. God’s plans are so much better than we can imagine.

We should always seek God’s guidance and direction rather than following the lust of the eyes and the cravings of the flesh, which will lead us away from God.

Sin causes us to be physically and spiritually weak, miserable, restless, guilty, hopeless, selfish, and empty.

Repentance is a genuine turning away from sin to draw closer to God. It is a turning point in our lives, admitting that we have sinned against God and turning from sin by the grace of God. Repentance is trusting God alone and recognizing that He knows what is best for us rather than following our own will. It is the only way out for a sinner who has turned away from God.

The younger son found himself in the worst place possible. It would have been unimaginable for the Jewish listeners for a good Jewish boy to be close to pigs, never mind wanting to eat their food. But this parable reminds us, no matter how far we have drifted from God’s will, if we repent with an honest heart, we can run back into the loving arms of our Lord and Saviour. Remember, even though our sins are like scarlet, they shall be made as white as snow by our God; though they are red like crimson, they shall be made like wool by our Lord (Isaiah 1:18).

The Parable of the Prodigal Son shows us that God’s love is abundant, and He is willing to forgive and receive repentant sinners. God is faithful and just, according to 1 John 1:9, to forgive our sins and cleanse us from all unrighteousness. God’s level of acceptance is infinite, and His love is limitless. Jesus’s sacrifice on the cross demonstrates His love and grace.

Just as the father in the parable excitedly awaits his son’s return, our Heavenly Father joyously awaits our return with open arms. God accepts us as sinners and forgives us when we repent of our sins. The prodigal son thought he could return as a servant to his father, and yet he was restored to his place as a son. The beauty of God’s forgiveness is that it is as if we never sinned at all, and He restores us to our former position in His kingdom. Jesus will deliver us from the bonds of sin and make us His sons and daughters. “So, you are no longer a slave, but a son, and if a son, then an heir through God.” Galatians 4:7

The older brother represents the attitudes of the religious leaders. It’s an attitude of self-righteousness shown through jealousy and envy. The elder brother did not want to join his father’s celebration to welcome back the brother. We can imagine all the resentment built up over the years of his little brother’s absence. The shame his family had faced resulted from his brother’s selfish actions.

We, like the older brother, can suffer from feeling unappreciated. We long for our “fattened calf” rather than rejoicing in how God works in someone else’s life.

Both sons in this parable show sinful attitudes and actions which dishonour their father. Yet, the father’s willingness to forgive them both gives us all hope.

In conclusion, review the following points considered in the lesson with the pre-teens and then pray with them to round up the lesson:

YOUTH GAMES AND ACTIVITIES FOR PARABLE OF THE PRODIGAL SON

PARABLE OF THE PRODIGAL SON – Baby and toddler, preschool and 5+ lesson