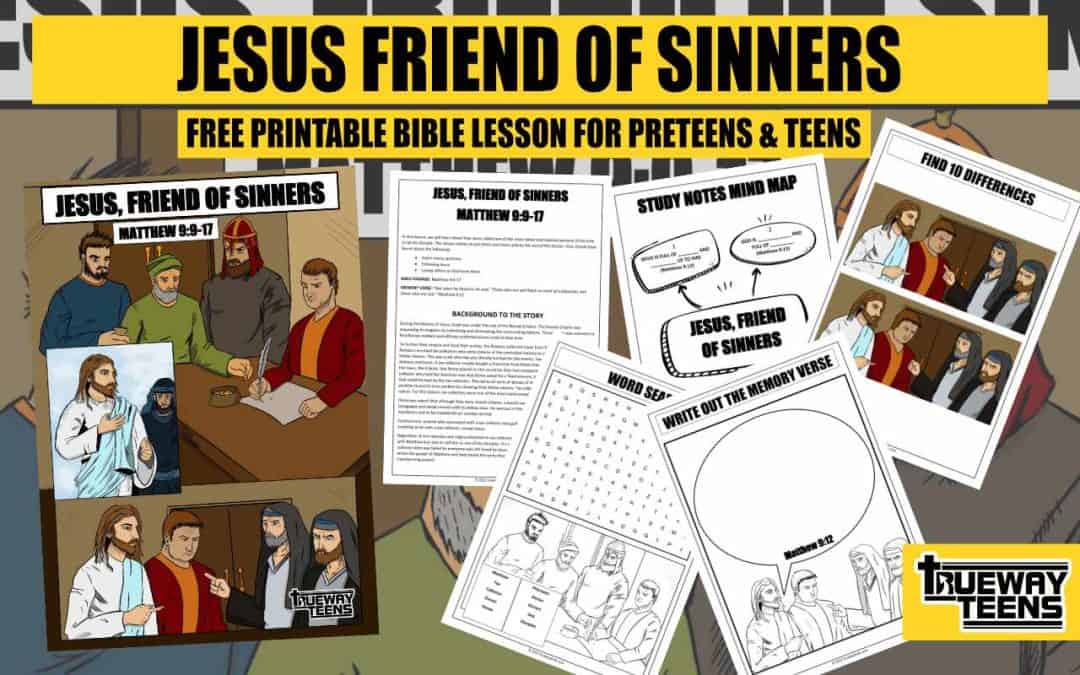 In this lesson, we will learn about how Jesus called one of the most hated and rejected persons of his time to be His disciple. This lesson relates to pre-teens and teens and by the end of this lesson, they should have learnt about the following:

MEMORY VERSE: “But when he heard it, he said, “Those who are well have no need of a physician, but those who are sick.” Matthew 9:12

During the lifetime of Jesus, Israel was under the rule of the Roman Empire. The Roman Empire was expanding its kingdom by colonizing and dominating the surrounding nations. Therefore, it was common to find Roman soldiers and officials scattered across Israel at that time.

To further their empire and fund their armies, the Romans collected taxes from the controlled nations. The Romans recruited tax collectors who were citizens of the controlled nations to collect the tax from their fellow citizens. This was a job whereby you literally worked for the enemy. Tax collectors were typically dubious and harsh. A tax collector usually bought a franchise from Rome that gave them the right to collect the taxes, the tribute, that Rome placed on the countries they had conquered. The advantage to the tax collector who held the franchise was that Rome asked for a fixed amount, but anything collected above that could be kept by the tax collectors. This led to all sorts of abuses of the system. They used their position to enrich their pockets by cheating their fellow citizens. Tax collectors were seen as traitors to the nation. For this reason, tax collectors were one of the most hated people during that time.

Historians report that although they were Jewish citizens, a Jewish tax collector was barred from the synagogue and social contact with his fellow Jews. He was put in the class alongside robbers and murderers and to be treated like an unclean animal.

Regardless of the rejection and stigma attached to tax collectors, Jesus went ahead not only to associate with Matthew but also to call him as one of His disciples. It’s so wonderful to know that Matthew, a tax collector who was hated by everyone was still loved by Jesus. He became one of Jesus’ twelve disciples, wrote the gospel of Matthew and help found the early church later. How wonderful is God’s love and transforming power!

Jesus wants everything to do with you because He came for people who are not good enough. Jesus is the great physician. As shown in our memory verse, a physician usually deals with people who are sick or weak. Jesus will always accept all who come to Him in need of help. No matter how rejected they may be among their peers.

If Jesus went out of his way to call Matthew, a tax collector, one of the most hated people in society to follow Him, then He will certainly receive all who will come to Him.

We all need someone to show us mercy at some point in our lives. Sadly, people have a tendency to be slow to show mercy to each other. People lie against others, purposefully misunderstand those they disagree with, or even hate another group for no just cause.

Matthew was an outcast. No one really wanted to hear from him. Society didn’t care whether he was sincere or desired to repent. People placed a label on him and so it was. He suffered this situation till Jesus called him to be a disciple.

When Jesus met Matthew, He looked past the usual filth associated with tax collectors and showed him love. This shows how loving and merciful God is. Even when no one will understand, God always understands. He shows mercy to one and all, no matter the situation we find ourselves in. God desires mercy and not sacrifice, (Matthew 9:13) so he is always drawn to all who need His mercy.

As soon as Jesus called Matthew, he left all he had known to follow Jesus. Matthew left his former lifestyle, his office as a tax collector and his dubious ways to follow Jesus. Indeed, we really can’t follow Jesus if we have not turned our backs on something.

As Jesus called Matthew to follow him, he calls us all today to follow him. We too must respond the same way Matthew did. We must leave all to follow him. Leaving all means we surrender our lives to Him and crown Him as Lord over our lives. We must give up anything that stands in the way of following Jesus to become His disciples. We give up all and yet gain so much more when we follow Jesus.

The Pharisees were so proud and arrogant that they almost dictated to God how people should be treated. They were primarily behind judging and condemning people. When Jesus sat with Matthew in his house, they became angry at Jesus for doing this.

In their view, Jesus should instead be having a banquet with upright and respectable people like them, not ‘sinners’. Not that they had invited Jesus to a banquet. God does not want us to act this way. He wants us to love people just like He loves them.

The Pharisee saw themselves as better than others. Have you ever met someone who is sick but refuse to admit it or to visit a doctor? It is obvious to everyone they need a doctor, but they won’t admit it. Only people who recognize that they are sick go to the doctor.

We too must guard our hearts again self-righteousness. The apostle Paul wrote in 1 Timothy 1:15, “Christ Jesus came into the world to save sinners, of whom I am chief.” Paul mightily used by God never forgot his own depravity outside of God’s grace.

In conclusion, review the following points considered in the lesson with the pre-teens and then, pray with them to round up the lesson:

YOUTH GAMES AND ACTIVITIES FOR JESUS, FRIEND OF SINNERS (MATTHEW)

JESUS, FRIEND OF SINNERS – Baby and toddler, preschool and 5+ lesson