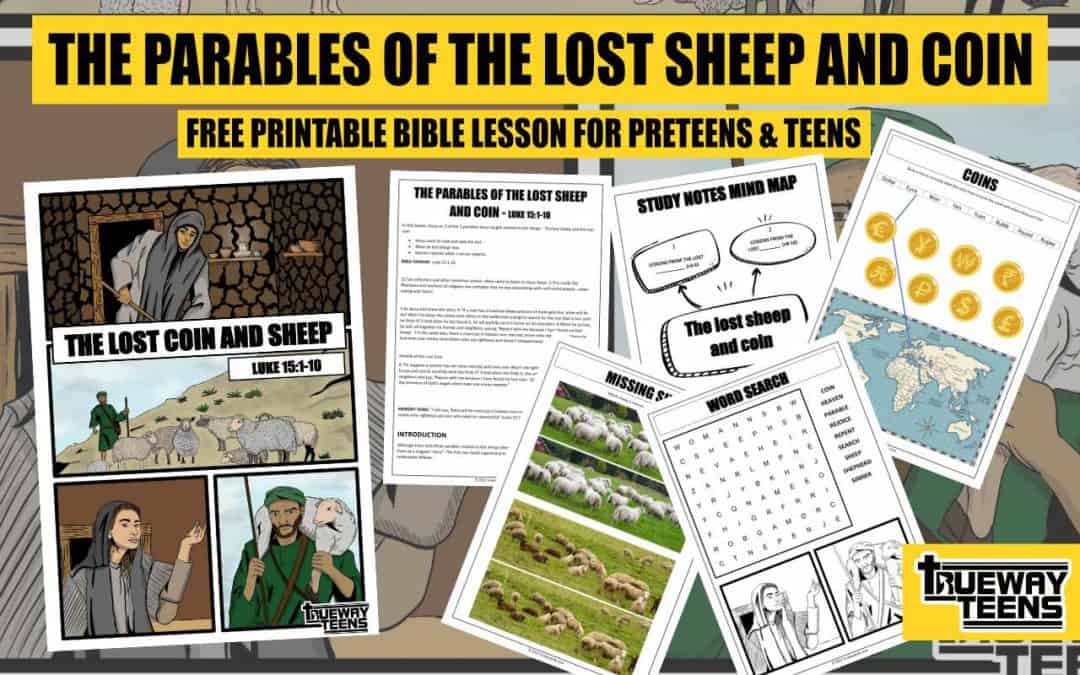 In this lesson, we will study two parables Jesus taught related to lost things – The lost sheep and the lost coin. We will cover the lost son in the following study. This lesson relates to pre-teens and teens, and by the end of this lesson, they should have learned about the following:

MEMORY VERSE: “I tell you, there will be more joy in heaven over one sinner who repents than over ninety-nine righteous persons who need no repentance” (Luke 15:7).

Although Jesus tells three parables related to lost things (sheep, coin, son/brother), Luke’s Gospel presents them as a singular “story”. The first two teach a general principle; when the lost is found, a joyful celebration follows.

The Pharisees of Jesus’ time taught that God would welcome a repentant sinner, but through these parables, Jesus teaches that He seeks out sinners by the grace to lead them to repentance.

BACKGROUND OF THE STORY

In Luke 14, there is a great crowd following Jesus. His miracles and teachings attracted people from all over Galilee and Judea. Many of those in the crowd were despised and rejected by society. In the midst of this, Jesus shares these parables to explain something of God’s grace to sinners.

The scribes and Pharisees criticized Jesus for receiving and eating with sinners. They stayed clear of the marginalized in fear of being contaminated. In response, Jesus refers to the parables of the lost sheep, the lost coin and the prodigal son.

The sheep that was lost represents the sinner who has gone astray. While the 99 were safe within the flock, the lost sheep was in grave danger.

A shepherd in Jesus’ time was responsible for each sheep and had an obligation before his master that none should stray, die or be seriously injured (Matthew 18:11-14). In this parable, the shepherd is Jesus, who has come to look for the sinner.

It’s also worth noting that shepherds were treated as dirty by the religious leaders.

The lost sheep is too weak and too lost to return on its own strength in the parable. The shepherd’s love is so great he leaves the ninety-nine sheep to find the one that is lost. He then carries the sheep on his shoulders to bring it home.

Here we can see God’s love and joy in seeking sinners. Remember, the rabbis taught that God was willing to receive sinners who sought His forgiveness persistently, but here, it is God who seeks the sinner. God’s love is so great that He seeks each one (Ezekiel 34:16) and rejoices when He finds them.

A God who forgives sinners who come to Him for mercy is undoubtedly good, but a God who tenderly seeks out sinners and joyfully forgives them shows extraordinary love. That love brought Jesus into the world to seek and save the lost.

This same love continues today. Regardless of age, social, political and cultural changes, God still seeks the lost and calls them to repentance.

The second parable Jesus teaches is of the lost coin. Jesus speaks of a woman who loses a coin in her house and the great lengths she goes to until she finds it.

The typical house in Israel at that time of Jesus had tiny windows or no windows at all. So, a lamp was needed for light, even in the daytime.

The drachma was a silver coin first used by the ancient Greeks and had a value similar to that of the Roman denarius and equivalent to a worker’s day’s wages.

But for women, they had even more value than a day’s wage. In Israel, it was customary for a woman to receive ten silver coins as a wedding gift. Hence, these coins had a more sentimental value beyond the monetary value, similar to a wedding ring today.

The coin might not have been worth much to someone else, but to her, it meant everything.

The woman lights a lamp and sweeps diligently. She will not give up or leave any place uncleaned until the lost coin is found.

In these parables, Jesus teaches us some of the qualities of lost things.

Direction: One of the first things we lose when we’re lost is our direction. The sheep was with the flock at some point, but he started wondering and got lost. No sheep ever intends to get lost; it just happens. They see something, it distracts them, and next thing they’re lost.

We live in a world where lots of things try to distract us. Maybe it’s our friends, something we see on the Internet or TV. The Bible tells us in Isaiah 53:6, “We all, like sheep, have gone astray; we have turned—everyone—to his own way.”

Protection and provision: When the sheep is in the shepherd’s flock, it’s under the shepherd’s protection. The shepherd cares for the sheep, and he makes sure that it has the provisions it needs (food, water, medicine, etc.). But in the wild, the sheep is all alone and one of the most vulnerable animals.

Often, we get so stressed in life because we have walked away from the Shepherd and His care. Psalm 23 says, “Even though I walk through the darkest valley, I will fear no evil, for you are with me; your rod and your staff, they comfort me.”

Potential: A single coin has so much potential. It will be passed around millions of times and fulfil many different purposes. It can buy food for a family, help someone in need, be used for entertainment, pay for medicine or education. But when the coin is lost, it cannot fulfil its potential. It’s worth is the same, but its potential has changed.

God has created us with so much potential, but when we get disconnected from Him, we can’t fulfil this full potential. The Bible says that “No eye has seen, no ear has heard, no mind has conceived what God has prepared for those who love him” 1 Cor 2:9.

These parables teach so much of God’s grace, love and how He values people. When that coin or sheep is lost, it doesn’t lose its value. It may not be worth much in somebody else’s eyes, but it’s worth a great price to the one who seeks it.

The Bible says in John 3:16, “For God so loved the world, that He gave His only Son, that whoever believes in Him should not perish but have eternal life.” That is how valuable you are to God.

The religious leaders of Jesus’ day were indifferent toward the lost. They saw themselves as worthy of a relationship with God but sinners as unworthy and of less value.

Jesus tells of the celebration by the shepherd and woman and follows it by saying, “there is rejoicing in the presence of the angels of God over one sinner who repents.” (Luke 15:10).

The religious leaders should have been rejoicing with Jesus, not criticizing Him for leading sinners back to God. If lost people matter this much to God, shouldn’t they matter this much to us? Shouldn’t we have the heart of God and follow Jesus’ example, to seek the lost and share the gospel with them.

THE PARABLES OF THE LOST SHEEP AND COIN – Baby and toddler, preschool and 5+ lesson