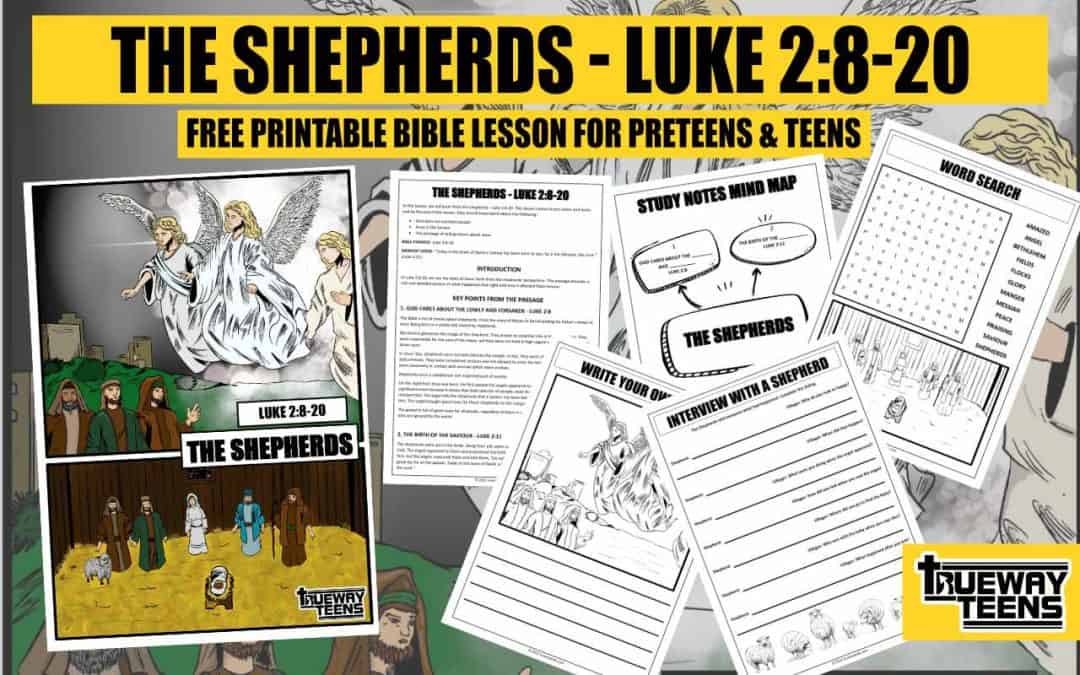 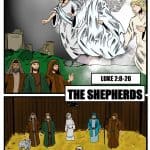 In this lesson, we will learn from the shepherds – Luke 2:8-20. This lesson relates to pre-teens and teens and by the end of this lesson, they should have learnt about the following:

MEMORY VERSE: “Today in the town of David a Saviour has been born to you; he is the Messiah, the Lord.” (Luke 2:11)

In Luke 2:8-20, we see the story of Jesus’ birth from the shepherds’ perspective. This passage provides a rich and detailed picture of what happened that night and how it affected them forever.

The Bible is full of stories about shepherds. From the story of Moses to David tending his father’s sheep to Jesus being born in a stable and visited by shepherds.

We tend to glamorize the image of the shepherd. They played an essential role in the community. They were responsible for the care of the sheep, yet they were not held in high regard and were often looked down upon.

In Jesus’ day, shepherds were not well-liked by the people. In fact, they were often associated with thieves and criminals. They were considered unclean and not allowed to enter the temple. This is because they were constantly in contact with animals which were unclean.

Shepherds were a needed but not respected part of society.

On the night that Jesus was born, the first people the angels appeared to were the shepherds. This is a significant event because it shows that God cares for all people, even those considered lowly and unimportant. The angel tells the shepherds that a Saviour has been born and that they should go and find Him. The angel brought good news for those shepherds on the margins of society.

The gospel is full of good news for all people, regardless of place in society. God does not overlook people who are ignored by the world.

The shepherds were out in the fields, doing their job, when suddenly, the night was lit up by the glory of God. The angels appeared to them and proclaimed the birth of the Saviour. The shepherds were terrified at first, but the angels reassured them and told them, “Do not be afraid. I bring you good news that will cause great joy for all the people. Today in the town of David, a Saviour has been born to you; he is the Messiah, the Lord.”

The angels were sent from heaven with a special announcement: the Saviour was born! It was the fulfilment of the promises made long ago. The wait was over. Jesus is Saviour, Messiah, and Lord. He is the only one who can save us from our sins and give us eternal life.

The shepherds quickly responded to the angel’s call, coming to worship the Saviour. This was a special moment for them, as they were the first to witness the birth of Jesus.

Verse 16 says, ” So they hurried off and found Mary and Joseph, and the baby, who was lying in the manger.”

The shepherds stopped what they were doing and quickly obeyed the angel’s message.

In our daily lives, it’s easy to make excuses for why we can’t do something. We tell ourselves that we’re too busy, not the right person or don’t have the time. But when it comes to obeying God, we should follow the shepherds’ example and obey quickly.

Imagine if the shepherds had said they were too busy to see Jesus. The shepherds were probably busy with their everyday tasks when the angels appeared to them. But when they were told about the birth of the Saviour, they went immediately.

When it comes to obeying God, there is no question that we should always do it quickly. We will never miss out when we follow God.

The shepherds returned to their flocks, glorifying and praising God for everything they had heard and seen. It was a miraculous night, and they were glad to have been part of it. They told everyone they met about the baby born in a stable and how the angels had visited them.

As Christians, we are called to share the good news of Jesus Christ with others. It can be easy to be shy or hesitant when discussing our faith, but it is vital that we do not keep the gospel to ourselves. When we share the love of Christ with others, we have the opportunity to lead them to the Saviour.

If we’ve met Jesus personally as Saviour, then we know how life-changing this experience would have been for the Shepherds. Our hearts and mouths should overflow with news of Him and what He has done in our lives. It’s a privilege to share the good news of Jesus.

YOUTH GAMES AND ACTIVITIES FOR THE SHEPHERDS

THE SHEPHERDS – Baby and toddler, preschool and 5+ lesson