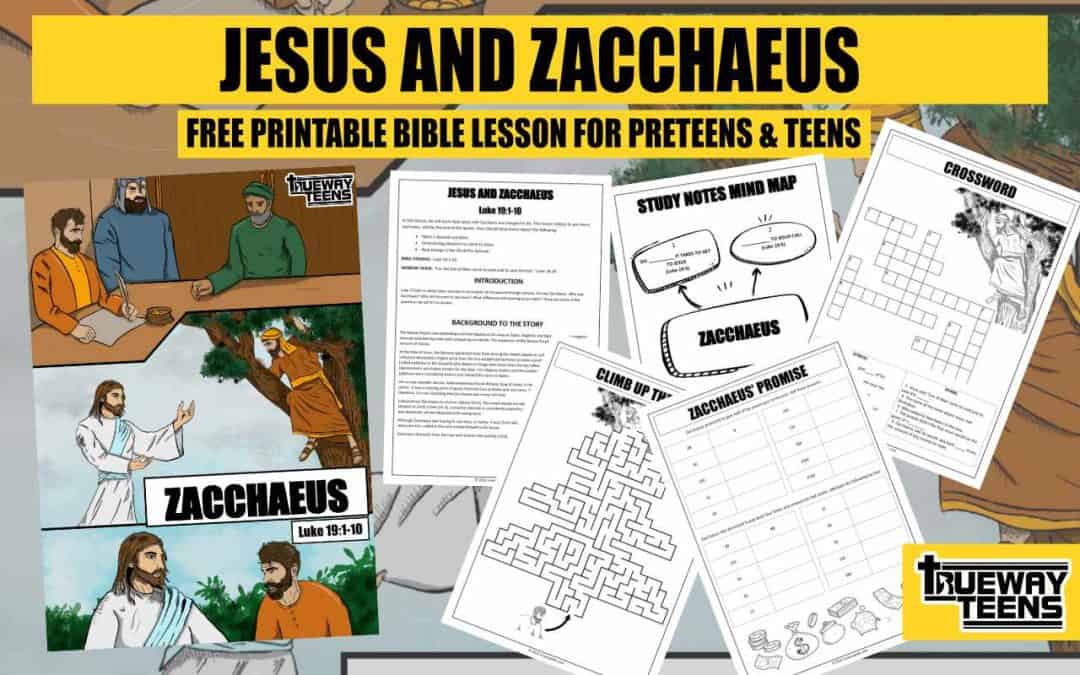 In this lesson, we will learn how Jesus met Zacchaeus and changed his life. This lesson relates to pre-teens and teens, and by the end of this lesson, they should have learnt about the following:

Luke 19 tells us about Jesus’ journey to Jerusalem. As He passed through Jericho, He met Zacchaeus. Who was Zacchaeus? Why did he want to see Jesus? What difference did meeting Jesus make? These are some of the questions we will try to answer.

The Roman Empire was expanding and held regions as far away as Spain, England, and Egypt. The Roman legions oversaw maintaining order and conquering territories. The expansion of the Roman Empire demanded a huge amount of money.

At the time of Jesus, the Romans appointed Jews from among the Jewish people to collect their taxes. These collectors demanded a higher price than the one established by Rome to make a profit. Some even hired employees (called publicans in the Gospels) who dared to charge even more than the tax collector demanded. These taxes represented a very heavy burden for the Jews. For religious leaders and the people in general, tax collectors and publicans were considered traitors and treated the same as lepers.

Let us now consider Jericho. Administered by Herod Antipas, king of Judea, it had become a thriving commercial centre. It was a crossing point of goods from the East to Rome and vice versa. There was a lot of commercial traffic; therefore, it is not surprising that Zacchaeus was a very rich man.

Luke portrays Zacchaeus as short in stature (19:3). The crowd would not allow him to get close to Jesus, so he decided to climb a tree (19: 4), a practice rejected or considered unworthy by the Jews. This tells us that Zacchaeus was desperate, almost obsessed with seeing Jesus.

Although Zacchaeus was hoping to see Jesus, in reality, it was Christ who saw him first (19:5) and took the initiative. Jesus saw him, called to him and invited Himself to His house.

Zacchaeus descends from the tree and receives him joyfully (19:6).

At the time of Jesus, it was regarded as undignified to run. Further, climbing a tree would be considered shameful and beneath a respectable person.

Zacchaeus was desperate to get to Jesus, regardless of what others thought.

What sort of things stop us from coming to Jesus?

Regarding salvation, people allow their pride, love of sin, peer pressure and worldliness to stop them from receiving Jesus as their Lord and Saviour.

But even as a believer, we can become lazy in coming to Jesus.

In our devotional time, we can feel too tired, too busy, distracted or unprepared to spend time reading our Bible and praying.

We can miss joining in worship at church due to sporting events, family commitments, a fun day out, etc.

In our commitment, we can also allow what others think to affect our witness, prayer life and closeness to Jesus.

Zacchaeus put the thoughts and opinions of others to one side. His mind was focused on Jesus and meeting Him.

Jesus called out to Zacchaeus directly and told him exactly what he was to do (Luke 19:5). Zacchaeus responded by quickly obeying Jesus. In the Gospels, we see the disciples reacting similarly. They hear Jesus’ invitation, leave all and follow Him.

In contrast, we see another rich man in Matthew 19:16-30. He was good and respectable but unwilling to leave his worldly riches behind to follow Jesus.

Today, Jesus is still calling people to a new life in Him. He speaks to us clearly through the Bible and tells us what to do. How do you respond to Jesus’ call?

Zacchaeus was a rich tax collector (Luke 19:2), and he became rich by mistreating and stealing from others. Zacchaeus was considered a traitor and a thief. He was considered such a sinner that he should be avoided so that his sin wouldn’t rub off on you.

We further see this in that the people who followed Jesus were unhappy that Jesus entered the tax collector’s house. As in the case of Matthew and others, the ‘good’ members of the society refused to believe that Jesus could make a change in such a despicable sinner and that spending time with them would be for any noble purpose.

Jesus broke through people’s preconceptions about “sinners” by saying they were the people He came to save and minister to. (Luke 19:10)

Who are some people we view as unlovable or beyond saving? This meeting between Zacchaeus and Jesus shows us that no one is too sinful to be saved and changed by Jesus.

Zacchaeus addresses Jesus as “Lord” (Luke 19:8), and his new life shows a real and genuine change. Zacchaeus has a change of heart and wants to right the wrongs he has done.

The Jewish law required that something stolen should be returned plus a fifth as a penalty (Leviticus 6:5 & Numbers 5:7).

Zacchaeus voluntary decides to go beyond what the law requires. He produces fruits of genuine repentance. The earthly wealth he previous cared so much about could not compare to the unimaginable spiritual riches he had found through Jesus.

Zacchaeus did not try to justify himself by giving away his money. He was not trying to buy his way back into a right relationship with God. No, his actions were an outward sign of a changed heart.

The things we do cannot save us; only faith in God can. But one clear way to know our faith is genuine is if it is accompanied by good fruit and actions which flow from a repentant heart (James 2).

The story of Jesus and Zacchaeus is a moving salvation story. It’s A rich story of God’s forgiveness and mercy (1:77-78) towards a sinner like Zacchaeus and an example of a life rescued by God’s grace.

YOUTH GAMES AND ACTIVITIES FOR ZACCHAEUS