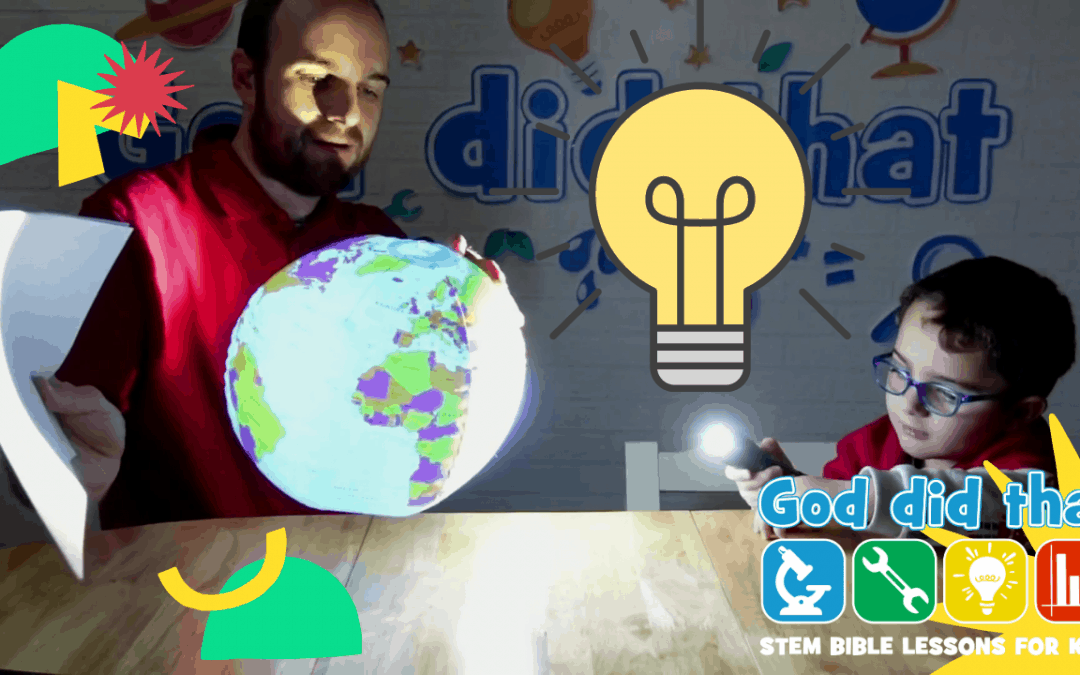 How are you able to read this? You might say knowing how to read or a computer, but the most basic of all things you need is light.

Name all the lights of which you can think.

Did you know light was the very first thing God spoke into existence? Without light, there could be nothing else.

A red light on the street means you are to do what? What does it mean when the light turns green? What is the most important light there is?

The sun is a very important light in the sky. Before clocks were invented, the sun told people what time it was. When the sun rose, it was time to get up. When it was directly overhead, it was time for lunch. People even created a type of clock called a sundial that used sunlight and shadow to tell the time!

The opposite of light is darkness. Darkness is the absence of light. You cannot create a darkness lamp that makes things dark. You can only make things dark when you eliminate the light.

Light moves very fast. It is faster than sound. That’s why we see lightning before we hear thunder, which is the compression wave lightning creates.

Some things make the speed of light slow slightly. Are you curious about what can slow light down?

God has no darkness in Him at all!

Let’s do some experiments about light and see what we discover.

The sun is a very important light in the sky.  Before clocks, people would use a sundial to tell the time. You can make your own very easily. You will need a paper plate, some tack, a pencil and a pen.

Have you ever wondered why the moon changes shape? Sometimes, it is perfectly round and other times it is barely there. The moon does not have light of its own. Instead, the moon reflects the light of the sun and makes it look like it possesses its own light. If the moon is reflecting light, do you think the shape of the moon might be affected by something blocking the light? Can you think of something that might block part of the light from the sun? Set up the globe in a darkened room, and pull out your flashlight. Shine the flashlight at the globe and move it around, closer, farther, and so on. Ask yourself—

People use the phrase “traveling at the speed of light” to mean something is going super-fast. Light travels faster than sound. Scientists says that light always travels at the same speed in a vacuum. That means in space, it will always go at the same speed, but some things can slow it down just a little. Put two clear glass cups on the counter. Put a pencil in each cup. Ask yourself—

This is called refraction. Can you think of other times this happens?

As the first thing God created, light is very important. What is the opposite of light?

What makes a shadow?

God put the rainbow in the sky as a promise He would never again do what?

What is refraction, and how does it affect objects seen under water?

There are many verses in the Bible talk about light.

What happens if we walk around in the dark? Have you ever stubbed your toe or run into something? Living in sin is the same as walking in darkness. Sin is like a big shadow that blocks us from God’s light.

Jesus came to earth to save us from the darkness and shadow of sin. He said if we confess our sins, He is faithful and just to forgive our sins and cleanse us from unrighteousness (John 1:9). Jesus is light, and those who follow Him no longer have to stumble in the dark.

The Bible also says that Christians are light. Just as the moon reflects the light from the sun, we can reflect the light of Jesus to others. When we love them, serve them, forgive them, we are reflecting God’s light to them. We are to be moons of Christ!

Who is the Light of the World?

What creates a shadow in our souls?

How do we reflect Jesus to other people?