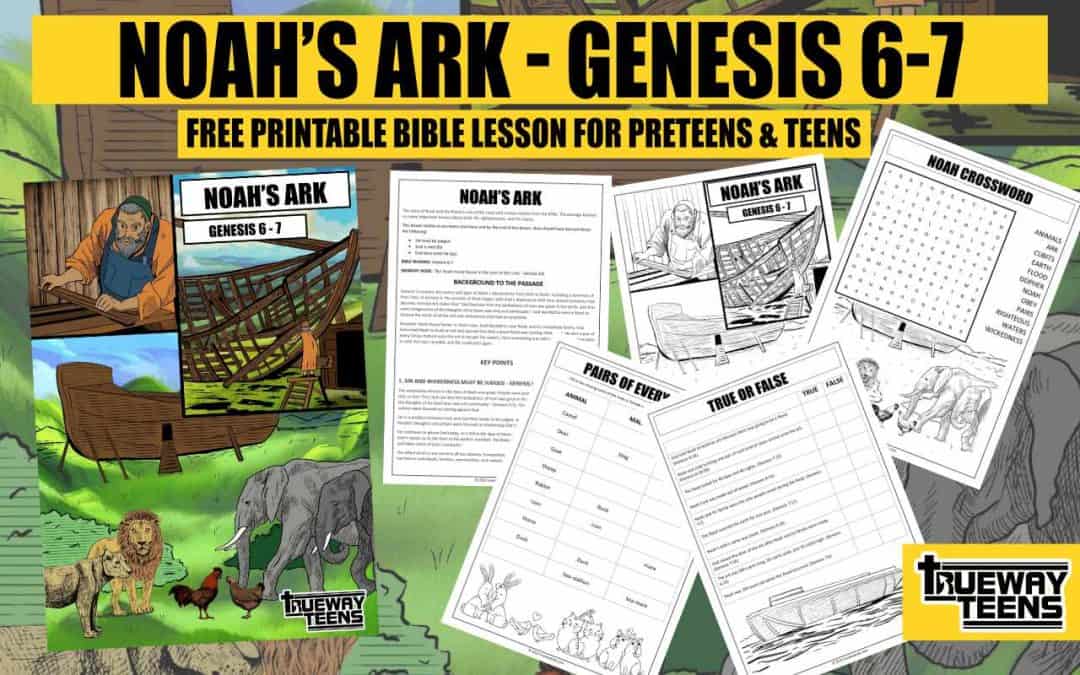 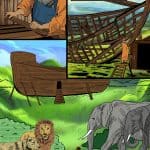 The story of Noah and the Flood is one of the most well-known stories from the Bible. The passage teaches us many important lessons about God, His righteousness, and His mercy.

This lesson relates to pre-teens and teens and by the end of this lesson, they should have learned about the following:

MEMORY VERSE: “But Noah found favour in the eyes of the Lord.” Genesis 6:8

BACKGROUND TO THE PASSAGE

Genesis 5 contains the names and ages of Adam’s descendants from Seth to Noah, including a summary of their lives. In Genesis 6, the account of Noah begins with God’s displeasure with how wicked humanity had become. Genesis 6:5 states that “And God saw that the wickedness of man was great in the earth, and that every imagination of the thoughts of his heart was only evil continually.” God decided to send a flood to cleanse the earth of all the evil and wickedness that had accumulated.

However, Noah found favour in God’s eyes. God decided to save Noah and his immediate family. God instructed Noah to build an ark and warned him that a great flood was coming. Afterward, He sent a pair of every living creature onto the ark to escape the waters. Once everything was safe on board, God shut them in until the rains receded, and life could start again.

1. SIN AND WICKEDNESS MUST BE JUDGED – GENESIS 6:5

The wickedness of man in the days of Noah was great. People were wicked, corrupt and violent. The Bible tells us that “The Lord saw that the wickedness of man was great in the earth, and that every intention of the thoughts of his heart was only evil continually.” (Genesis 6:5). This means that their thoughts and actions were focused on sinning against God.

Sin is a problem between man and God that needs to be judged. In the days of Noah, sin was rampant. People’s thoughts and actions were focused on disobeying God’s laws and disregarding His will.

Sin continues to grieve God today, as it did in the days of Noah. Sin is an offence against God and His laws, and it causes us to fall short of His perfect standard. The Bible says in Romans 3:23 that “all have sinned and fallen short of God’s standards.”

The effect of sin in our world is all too obvious. Everywhere we look, we can see the devastating impact sin has had on individuals, families, communities, and nations. All of us have been touched by the repercussions of sin. Sin is a destructive force that takes many forms and destroys relationships, health, possessions, and even lives.

God must judge sin because He is righteous and holy. The Bible says in Psalm 89:14, “Righteousness and justice are the foundation of Your throne; steadfast love and faithfulness go before you.”

God’s mercy is seen in Noah’s Ark in that He gave Noah and his family a way of salvation.

God is merciful and forgiving, and He loves the people of the world enough to warn them of impending judgment. God told Noah to build an ark, giving him specific instructions on how to be saved.

God’s patience and mercy are seen clearly, as He waited patiently while Noah and his family built the Ark according to God’s instructions. God did not rush to punish them immediately but gave them a warning and a chance for salvation (See 1 Peter 3:20 and 2 Peter 2:5).

Today, God provides us with Jesus as our way of salvation. Jesus died on the cross as payment for our sins, offering us forgiveness and eternal life if we believe in Him. We can receive this free gift of salvation by faith alone, apart from any good works we might do (Ephesians 2:8-9).

By entering the Ark, Noah and his family ensured their physical salvation from the flood. Similarly, by believing in Jesus (John 10:9), we enter into spiritual salvation for eternity.

Even though Noah’s culture was wicked and corrupt, he chose to remain faithful to God and follow His commands. This faithfulness cost him greatly, but the reward was much greater.

God gave Noah detailed instructions that he had to follow to be saved from the great flood. In Genesis 6:14-22, God commanded Noah to build an ark out of cypress wood and gave him the exact dimensions it should have. He commanded Noah to bring two of every living creature on board the Ark.

Building the Ark was no easy task. It was a mammoth undertaking which would require an immense amount of work and dedication. To construct the Ark according to God’s specifications, Noah and his family had to collect large amounts of cypress wood and other materials like pitch, resin and gopherwood. It was hard work and would have cost a lot.

Noah was likely mocked by those in his day for the seemingly impossible task that God had set before him. He was probably perceived as a fool or madman. Many scholars even believe that it had never rained before Noah. Genesis 2:6 says, “But streams came up from the earth and watered the whole surface of the ground.” Hebrews 11:7 talks about “being warned by God concerning events as yet unseen.”

Noah was a great example of obedience and trust in God, despite the cost. His willingness to follow God’s instructions no matter what showed his unwavering faith, even when others thought he was crazy for doing so.

Noah’s task of building the Ark took many years to complete. The exact time it took is unknown, but it was undoubtedly a long process.

Noah kept trusting God, no matter how hard it may have been. He knew that even if the people around him mocked him, he had to keep obeying the Lord’s commands and continue building the Ark until it was complete.

Days, weeks, months and years passed by, and people continued to mock and say the flood would never happen, but it did come.

2 Peter 3:9 says, “The Lord is not slow to fulfil his promise as some count slowness, but is patient toward you, not wishing that any should perish, but that all should reach repentance.” God gives us time to repent and turn away from our sins, but He will keep His promise.

Today people may mock us when we speak of Jesus’ return or God’s judgement, but just as Noah was obedient to God’s commands and trusted in His promises during the great flood, we must be faithful in our obedience.

The Bible tells us that Jesus will come again one day, and with Him will come a final judgment. This judgment will be the ultimate reckoning of all humankind.

Today, we live in a day of grace with the chance of salvation through Jesus Christ. By turning away from our sin and entering into a relationship with Jesus, we can be safe for eternity with Him.

Noah’s faithfulness and obedience to God are an example for us all. Even when faced with ridicule from those around him, he trusted and obeyed God. We should be like Noah, remaining obedient and trusting that God will fulfil His promises.

Just as He did in the time of Noah, God is still patient with us today, giving us time to repent and turn away from our sins. When Jesus returns one day, there will be a final judgement for all of humanity. Let us be faithful like Noah until the end.