PAUL AND SILAS IN PRISON – ACTS 16 (Bible lesson for teens) 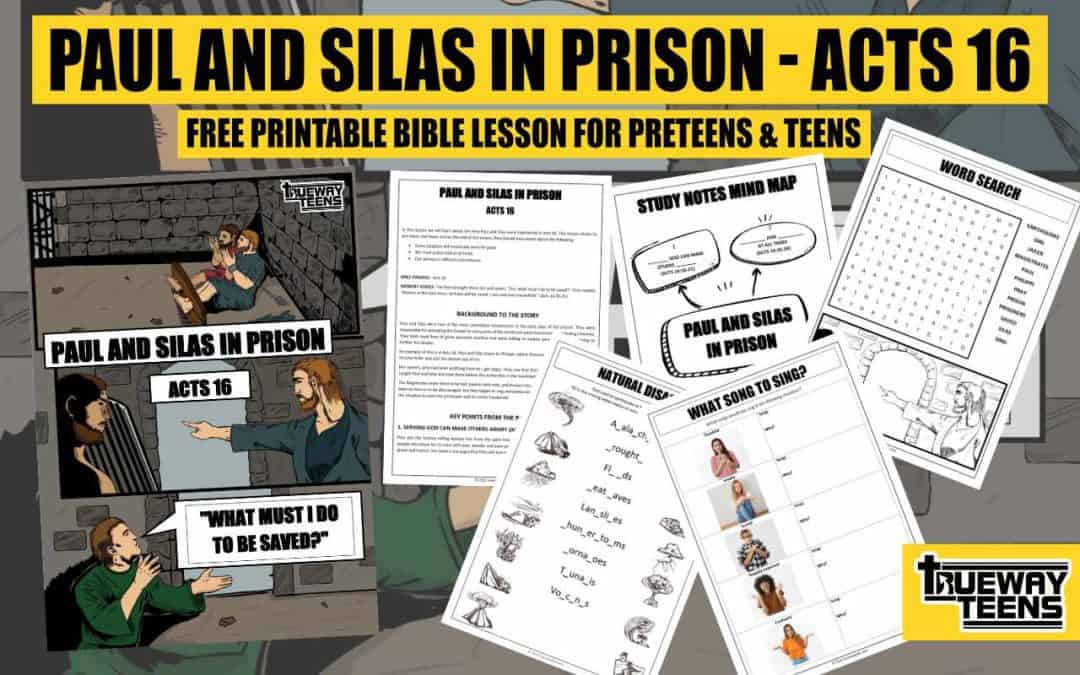 In this lesson, we will learn about the time Paul and Silas were imprisoned in Acts 16. This lesson relates to pre-teens and teens and by the end of this lesson, they should have learnt about the following:

MEMORY VERSES: “He then brought them out and asked, “Sirs, what must I do to be saved?” They replied, “Believe in the Lord Jesus, and you will be saved—you and your household.” (Acts 16:30-31).

Paul and Silas were two of the most committed missionaries in the early days of the church. They were responsible for spreading the Gospel to many parts of the world and were instrumental in planting churches. They both lived lives of great personal sacrifice and were willing to endure persecution and hardship to further the Gospel.

An example of this is in Acts 16. Paul and Silas travel to Philippi, where they encounter a demon-possessed fortune-teller and cast the demon out of her.

Her owners, who had been profiting from her, get angry. They saw that their hope of profit was gone. They caught Paul and Silas and took them before the authorities in the marketplace.

The Magistrates order them to be tied, beaten with rods, and thrown into prison. This experience could have been an excuse to be discouraged, but they began to sing and praise God while in prison. Finally, God used the situation to save the jail keeper and his entire household.

Paul sets the fortune-telling woman free from the spirit that had occupied her life. We might expect the people who knew her to react with awe, wonder and even put their faith in Jesus. Instead, what we see are greed and hatred. Her owners are angry that they will lose money and demand Paul and Silas are punished.

The Gospel challenges us to do right, even when it’s difficult. People often don’t like it when we do right for the Gospel. They may not understand why we obey the Bible. But we must remain faithful to the Gospel, even when it’s unpopular.

Our friends may not like it when we won’t lie to cover something up. People may not like that we won’t do some of the things they do, but we must make obeying God our priority.

Paul and Silas were in a bad situation, which could easily have frustrated them. However, they were at peace with themselves and with God. At midnight, they began to pray, singing praises to God.

When we are in the middle of difficult circumstances, it is often hard to praise God. Our natural inclination is to complain and focus on our problems. However, the Bible says, “In everything give thanks; for this is the will of God in Christ Jesus for you” (1 Thessalonians 5:18). Why are we to give thanks in every situation?

Praising God in difficult circumstances is a way of showing our trust in Him. It says, “Even though I don’t understand what is happening, I know that God is in control, and He is good.” When we praise God, we express our confidence that He will work everything out for our good (Romans 8:28).

Praising God is not always easy, but it is always worth it. When we praise God, we are reminded that He is in control, no matter what happens in our lives.

The Bible says, “Suddenly there was a great earthquake so that the foundations of the prison were shaken; and immediately all the doors were opened, and everyone’s chains were loosed” (Acts 16:26).

Paul and Silas praised God even before they were set free from prison. They knew that God is worthy of praise in all circumstances.

As Paul and Silas were singing, the fellow prisoners were listening to them. Following the earthquake, everyone’s chains were loosed, and the prison doors opened. When the prison keeper woke up, he wanted to kill himself because he was sure the prisoners had escaped. Paul called out to him, telling him that all of them were still there. The keeper couldn’t believe it. They acted in a way that he never expected. They didn’t respond the way the world would have responded.

It’s no secret that our life experiences can shape how we see the world. But, as Christians, how we act in difficult situations will affect those around us and can be a powerful tool for winning souls for Christ. In the midst of our difficulty, we can be a light to those around us and point them to the hope that we have in Christ.

The things we are going through can become God’s way of ministering to others. This is why we must not be discouraged. Our trials can become testimonies if we go through them with the right attitude. Paul and Silas’s beating and imprisonment brought salvation to the family of the prison’s warden. The Bible says, “we know [with great confidence] that God [who is deeply concerned about us] causes all things to work together [as a plan] for good for those who love God, to those who are called according to His plan and purpose” (Romans 8:28). This is our confidence; that God is able to turn our situation around and make a testimony out of it.

The jailer fell before Paul and Silas and asked how to be saved. The Bible says, “So they said, “Believe on the Lord Jesus Christ, and you will be saved, you and your household” (Acts 16:31).

There is no question more important than how to be saved. This question has eternal consequences. The answer is found in the Bible. The Bible tells us that we are all sinners and fall short of the glory of God (Romans 3:23). We deserve His wrath and punishment (Romans 6:23). However, God desires for us to be saved (2 Peter 3:9). He sent His Son, Jesus, to die on the cross for our sins (1 Corinthians 15:3-4). By His grace, we can be saved if we repent our sins and put our faith in Him (Acts 2:38).

Paul shared the answer with the jailer, “Believe in the Lord Jesus, and you will be saved” (Acts 16:31). That answer is still true today. Romans 10:13 says, “Everyone who calls on the name of the Lord will be saved.”

The jailer immediately put his trust in Jesus and was baptised alongside his household.

Not all our life experiences are going to be pleasurable, but as believers, we can be confident that God is always in control. We can praise Him at difficult times with this knowledge. Whether soon or in eternity, we will see that God was in control and has a purpose. We should be a testimony to God’s grace in the good and challenging moments and continually point others to Jesus.

YOUTH GAMES AND ACTIVITIES FOR PAUL AND SILAS IN PRISON

PAUL AND SILAS IN PRISON – Baby and toddler, preschool and 5+ lesson