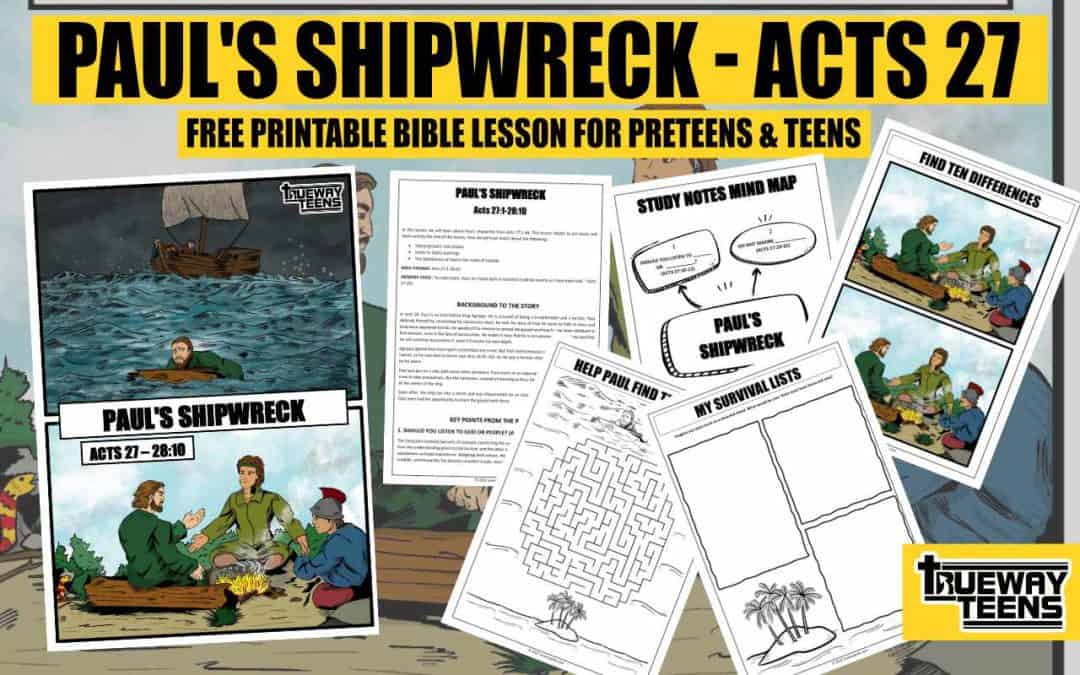 In this lesson, we will learn about Paul’s shipwreck from Acts 27:1-44. This lesson relates to pre-teens and teens and by the end of this lesson, they should have learnt about the following:

In Acts 26, Paul is on trial before King Agrippa. He is accused of being a troublemaker and a heretic. Paul defends himself by recounting his conversion story. He tells his story of how he came to faith in Jesus and how Jesus appeared to him. He speaks of his mission to spread the gospel and how he has been obedient to that mission, even in the face of persecution. He makes it clear that he is not ashamed of the gospel and that he will continue to proclaim it, even if it means his own death.

Agrippa agreed that Paul hadn’t committed any crime. But Paul had previously requested to be tried before Caesar, so he was sent to Rome (see Acts 26:31–32). As He was a Roman citizen, he had the right to a trial by his peers.

Paul was put on a ship with some other prisoners. Paul warns of an impending storm and advises the ship’s crew to take precautions. But the Centurion, instead of listening to Paul, followed the advice of the pilot and of the owner of the ship.

Soon after, the ship ran into a storm and was shipwrecked on an island. Everyone on board survived and Paul even had the opportunity to share the gospel with them.

The Centurion received two sets of counsels concerning the voyage. The first was from Paul, who was talking from the understanding given to him by God, and the other was from the ship’s captain, who spoke from his calculations and past experience. Weighing both advice, the Centurion took the captain’s advice to be more credible. Unfortunately, his decision resulted in pain, distress, and losses.

Sometimes it seems like everyone has advice for us. There are a lot of opinions on the internet, on social media, and in our social circles. We are surrounded by experts and gurus who want us to listen to them and follow their wisdom.

So, who’s advice should we follow? Do we listen to God or to people?

When it comes to making decisions, we must not ignore the advice of people. God has given us people who care for us, experts in different fields and people with experience. However, we must ultimately put God first in our decision-making process.

Often, people speak from the perspective of available facts and figures, as did the captain of Paul’s ship. But the Bible encourages us to always look beyond things that are seen (2 Corinthians 4:18), and it takes faith to do that.

Human understanding will always fall short of God’s knowledge. We must learn to always listen to Him and follow His ways.

Nothing takes God by surprise. In our Bible passage, God had revealed to the Apostle Paul the danger that awaited the voyage. Unfortunately, the warning was not taken seriously, and that decision led to severe losses to the ship and its crew.

Often believers and non-believers ask questions like, “Why did God allow this event to happen to me?” Or “why didn’t God prevent that?”

The Bible is full of warnings and consequences from God. We see this throughout scripture, from the fall of Adam and Eve to the plagues of Egypt, to the Babylonian captivity. God is always warning His people of the consequences of their actions. God wants us to be aware of the dangers and consequences of our actions so that we can avoid them.

The Bible is clear about right and wrong, but people often want to ignore its teachings and do what they want to do. People want to believe they can handle things without any consequences, but the Bible makes it clear that there are consequences for our actions. When we ignore God’s warnings, we are putting ourselves in danger.

When the storm hit the ship, the people aboard started to panic and gave up the hope of surviving. With an endless stretch of stormy sea in every direction their despair was understandable. Yet Paul could say “be of good cheer!” (Acts 27:22). How? He continued in the next verse, “for there stood by me this night, the Angel of God…”(Acts 27:23). Isn’t that amazing and comforting?

Jesus said in Matthew 28:20, “I am with you always even to the ends of the world.”  The Bible also says, “When you pass through the waters, I will be with you, and through the rivers, they will not overflow you. When you walk through the fire, you will not be burned, and the flame will not scorch you” (Isaiah 43:2).

Paul didn’t hope to survive the storm due to his fantastic swimming skills, the captain’s ability to navigate the seas or luck being on their side. Paul had great confidence in the Lord. He knew that the Lord would never leave him or forsake him. Paul knew he was safe in God’s hand.

Paul encouraged the people on the ship with words of assurance and hope. But then, he further demonstrated his words by his actions and giving. His words, attitude, and actions went a long way to comfort and strengthen the hearts of the people around him. He didn’t just say words; his actions confirmed his speech.

If we want people to take our words seriously, we need to make sure that our actions support what we say. When we take action consistent with our beliefs, we show the world those beliefs are real and set an example for others to follow. When our actions don’t support our words, we create confusion and doubt.

When we talk about caring and loving others, our actions should show that. When we say we trust God is in control, we should act accordingly. As we speak of the power of prayer, we should pray believing.

As Christians, we’ve been called to be light and salt to our world (Matthew 5:13-14). One of the most crucial times to exhibit these qualities is during a time of distress or confusion. We should ask God for wisdom to make the right comments, say the right words and do the right actions.

To be a light for God is to walk in His truth, love, and light. It is to be a beacon for others who are lost or struggling. It is to let our light shine brightly so that others may see His hope and glory.

We learned from this study that amid conflicting opinions and perspectives that exist around us, the unchanging word of God must be given prominence. We should prayerfully seek God before making decisions and make Him an integral part of our daily lives. Jesus has promised not to leave or forsake us. As Christians, our hearts should be encouraged His abiding presence and our hope in Him should be visible to those around us.

The captain (a leader) should explain the commands and the relative actions that go with each command to the children. The must be able to understand each command.

Players that do the wrong action are out.