THE ARMOUR OF GOD (Bible lesson for teens) 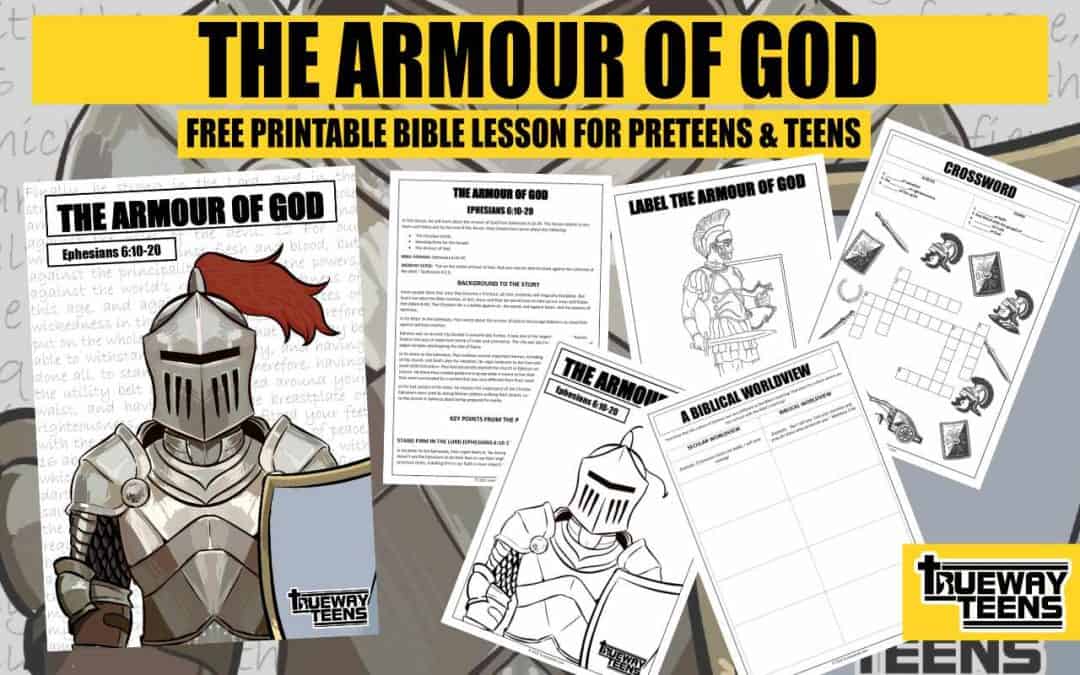 In this lesson, we will learn about the armour of God from Ephesians 6:10-20. This lesson relates to pre-teens and teens and by the end of this lesson, they should have learnt about the following:

MEMORY VERSE: “Put on the whole armour of God, that you may be able to stand against the schemes of the devil.” (Ephesians 6:11).

THE ARMOUR OF GOD pdf – preteen and teen Bible lesson

Some people think that once they become a Christian, all their problems will magically disappear. But that’s not what the Bible teaches. In fact, Jesus said that we would have to take up our cross and follow him (Mark 8:34). The Christian life is a battle against sin, the world, and against Satan, and the powers of darkness.

In his letter to the Ephesians, Paul wrote about the armour of God to encourage believers to stand firm against spiritual enemies.

Ephesus was an ancient city located in present-day Turkey. It was one of the largest cities in the Roman Empire and was an important centre of trade and commerce. The city was also home to a large number of pagan temples worshipping the idol of Diana.

In his letter to the Ephesians, Paul outlines several important themes, including the need for unity, the role of the church, and God’s plan for salvation. He urges believers to live lives worthy of their calling and to avoid sinful behaviour. Paul had personally planted the church in Ephesus and understood the people and culture. He knew they needed guidance to grasp what it meant to live their new identity in Christ because they were surrounded by a society that was very different from their newly discovered faith in Jesus.

In the last section of his letter, he teaches the importance of the Christian armour. Paul knew that the Ephesians were used to seeing Roman soldiers walking their streets, so he used the Roman’s armour to talk to the church in Ephesus about being prepared for battle.

In his letter to the Ephesians, Paul urged them to “be strong in the Lord and in His mighty power.” Paul doesn’t ask the Ephesians to do their best or use their might but rely on God’s mighty power. In these uncertain times, standing firm in our faith is more important than ever. We live in a world full of challenges and difficulties, but we can overcome them if we are strong in the Lord. When we are weak, He is strong. When we are discouraged, He gives us hope. When we are lost, He shows us the way.

Our confidence should be in the Lord and the grace and strength He supplies. The Bible says, “Submit yourselves to God. Resist the devil, and he will flee from you” (James 4:7). We must learn to stand firm in the Lord, not in our own strength or experience. We are weak in ourselves, but we are strong and equipped in Christ.

It is essential to recognize our enemies because they can do a lot of damage to us if we ignore them. Paul gives us a clear definition of who the opposition is in this warfare. He called them evil rulers, demonic authority, powers of this dark world, and against the spiritual forces of evil in the heavenly realms.

There is a spiritual battle going on all around us. We need to be on our guard and aware of the enemy’s tactics. We must be prepared. The enemy is real, powerful, crafty and relentless. But we have a Saviour who is stronger than the enemy. We have a Saviour who has already won the victory, loves us and holds us safely in His hand.

PARTS OF THE ARMOUR

Paul urges Christians to put on the whole armour of God so that they may be able to stand against the enemy. But what exactly are the parts of this armour, and what do they represent?

THE BELT OF TRUTH

Paul mentions the belt of truth as the first piece of armour. The Bible is the Word of God, and it is truth.

THE BREASTPLATE OF RIGHTEOUSNESS (EPHESIANS 6:14)

The Roman soldier’s breastplate was a key piece of armour in the Roman military. It was made of metal, usually bronze or iron, and was designed to protect the chest and abdomen from enemy attacks. The breastplate was often decorated with the emblem of the Roman legion to which the soldier belonged.

In Christ, we are given a righteousness that is not our own. It is a gift from God. When we stand in Christ’s righteousness, we are made right with God and can enjoy His blessings.

As the Roman soldier’s breastplate had the emblem of the Roman legion to whom he belonged, our breastplate reveals our identity in Christ. We are no longer defined by our sin or past but by our relationship with Jesus.

SHOES OF THE GOSPEL OF PEACE (EPHESIANS 6:15)

The Roman soldier’s shoes were made of high-quality leather and were designed to protect the feet from the rigours of marching and combat. The soles were thick and durable. They also often had spikes that would help them stand their ground. The shoes were an essential part of the Roman soldier’s uniform and were carefully maintained.

When we have a strong foundation of peace in our lives, we can take confident and decisive action. Just as shoes protect our feet from sharp objects and rough terrain, peace gives us the protection we need to navigate life’s challenges without fear.

A Roman soldier’s shield was a highly effective piece of military equipment and perhaps the most famous part of their kit. It was large enough to provide adequate protection from enemy attacks and was constructed in a way that allowed it to be used as a weapon. The shield was made of wood and covered with a thin layer of metal.

The shield was held in place by a strap that went over the soldier’s shoulder. The strap was also used to help the soldier keep the shield in the correct position. The shield could be used to block enemy attacks, and to hit enemies.

Paul says that the shield of faith protects us from the enemy’s flaming arrows. It is a shield that quenches the fiery darts of the wicked one. Faith protects our Christian life the way the shield protects the body.

The sword was a key part of a Roman soldier’s equipment. It was usually about two feet long and was made of iron. The sword was sharp on both sides and had a point at the end.

The sword was both a defensive and offensive weapon. Hebrews 4:12 says, “For the word of God is living and active, and sharper than any two-edged sword, piercing even to the dividing of soul and spirit, of both joints and marrow, and is able to discern the thoughts and intentions of the heart.”

With the Sword of the Spirit, we can cut through the enemy’s lies and slice through the chains that bind us.

In this study, we’ve learned that the Christian is in a constant battle with Spiritual forces which seek to destroy, incapacitate and frustrate them. However, God has provided us with powerful defensive and offensive weapons to counter enemy attacks and live a life of faith.

YOUTH GAMES AND ACTIVITIES FOR THE ARMOUR OF GOD

THE ARMOUR OF GOD pdf – preteen and teen Bible lesson

THE ARMOUR OF GOD – Baby and toddler, preschool and 5+ lesson