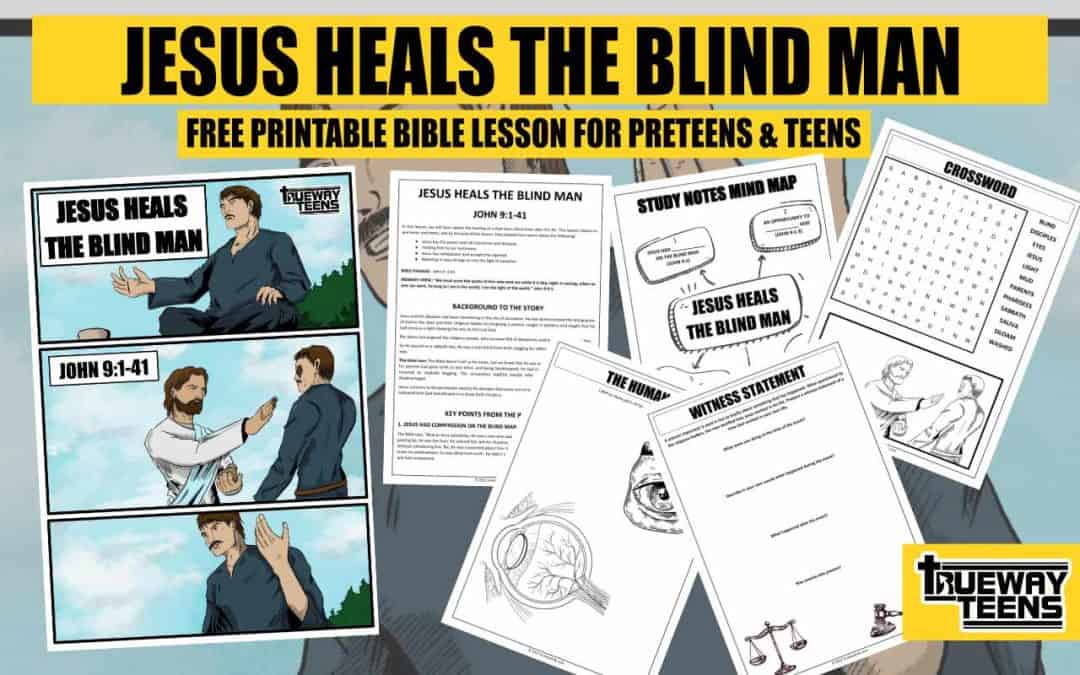 In this lesson, we will learn about the healing of a man born blind from John 9:1-41. This lesson relates to pre-teens and teens, and by the end of this lesson, they should have learnt about the following:

MEMORY VERSE: “We must work the works of him who sent me while it is day; night is coming, when no one can work. As long as I am in the world, I am the light of the world.” John 9:4-5.

Jesus and His disciples had been ministering in the city of Jerusalem. He had demonstrated the loving grace of God to the Jews and their religious leaders by forgiving a woman caught in adultery and taught that He had come as a light showing the way to the true God.

His claims had angered the religious people, who accused Him of blasphemy and attempted to stone Him.

As He passed on a sabbath day, He saw a man blind from birth, begging for offerings from passers-by on the way.

The blind man: The Bible doesn’t tell us his name, but we know that he was an adult Jewish male. We know his parents had given birth to him blind, and being handicapped, he had no means of livelihood and had resorted to roadside begging. This occupation typified people who are socially and economically disadvantaged.

Jesus, contrary to the perception held by His disciples that some sort of sin was responsible for his condition, indicated that God had allowed it to show forth His glory.

The Bible says, “Now as Jesus passed by, He saw a man who was blind from birth”(John 9:1). While Jesus was passing by, He saw the man; He noticed him and his situation. He could have overlooked him and passed by without considering him. No, He was concerned about him. He did not just look at the man, He saw him! He knew his predicament; he was blind from birth. He didn’t see him so as to look down on him. He saw him and had compassion.

The disciples also saw the man, but they did not see what Jesus saw. They saw a fault for his situation (A result of his or his parent’s sin.) They wanted to point to the blame for his condition. However, Jesus proved them wrong. Jesus made them see the workings of God in people’s situations.

The man could not see Jesus, but he was seen by Him. Jesus saw him before the man was privileged to see his Lord. Before the man could see light, the ‘Light of the World’ saw and found him. What a blessing it is to be found by Jesus.

Jesus had healed people who were blind by evil occurrences, accidents, and even diseases. However, this man’s situation was not caused by carelessness, accident, or infection. He was born that way. It seems the disciples had a notion that blindness is caused by sin. So, they wanted to know if it was caused by the man’s sin or his parents. Jesus’ response made it clear that not every unpleasant situation or illness is caused by sin. Like this man’s case, God wants to use it to glorify Himself.

No matter how unpleasant your situation is, it’s an avenue for God to demonstrate His power. When something terrible happens, people are quick to point blame and assume it is a result of their sin, actions, and inactions. Sometimes, such events are mere platforms that God wants to use to express His power and take the glory. Jesus never missed an opportunity to do good works and Glorify His Father in Heaven. Every situation is an opportunity to glorify God.

When people are in a difficult situation or suffering an illness, we should not think of them as sinners. We shouldn’t think they are suffering the implications of their choices. As we saw in the passage, the man was born blind; neither he nor his parents sinned. He was only a victim of blindness from birth, and Jesus was interested in helping him. There are people today who are victims of life’s circumstances and sicknesses, and it is not their fault. Jesus stated, “as long as I am in this world, I am the light of the world”.

This should be our motto too. In Matthew 5:14, Jesus says, “You are the light of the world. A city set on a hill cannot be hidden.”

As long as we are in this world, we should be agents of light, solution, hope, and love. We should help others irrespective of their situation and see it as an opportunity to express God’s power, grace, love and mercy. We seize the moment for God to take all the glory.

Jesus, in response to the question of His disciples concerning the cause of the man’s blindness, said, “As long as I am in the world, I am the light of the world.” A blind man spent all of his life in darkness, because of his inability to see, he cannot appreciate the beauty of the green grass and the colourful flowers. He cannot marvel at the wonders of God’s glorious creation. He has never seen his parents’ faces.

As the light of the world, Jesus is able not just to heal physical blindness but also to heal spiritual blindness and bring us out of spiritual darkness into His marvellous light. We only need to believe in Him.

Jesus said, “I am the light of the world: he that follows me shall not walk in darkness, but he shall have the light of life” (John 8:12). Anyone without Jesus is blind and in darkness, but when he believes in Him, their eyes are opened to behold the wondrous works of God through Christ. Spiritual vision allows us to see everything differently.

When questioned by the religious authorities, the blind man courageously stood his ground, not wavering on his testimony about Jesus and the healing he had received from Him.

Being a believer in Jesus and proclaiming the Gospel to others will often result in some form of opposition and sometimes persecutions.

However, having experienced the wonders of God’s grace, we ought to stand firm in our testimony. We should not allow the opposition to discourage us from believing, following and witnessing for Jesus.

Let us not be like Peter, who denied Jesus when he was asked if he knew the Lord in the palace of the High priest. Instead, as 2 Timothy 1:8 says, “Be not ashamed of the testimony of our Lord…but be thou partaker of the afflictions of the gospel according to the power of God;”.

When Jesus learned that the Pharisees cast the man out, He looked and found him. Jesus welcomed the man, even though the religious leaders rejected him. Jesus revealed Himself to the man, and he believed in Christ as the Son of God and worshipped Him. The man could not doubt what had happened to him. He was saved with belief in his heart and the confession of his lips (Romans 10:10).

Jesus wants to open our eyes of faith to see and believe in Him so that we may be saved. God works in our human situations to draw us to Him, so we can know Him and enjoy Him forever. God gives His gifts so we can become attracted to the Giver, not the gift. He intends to draw our attention to Him. Has God blessed you before? Has God performed a miracle in your life? Your focus should not be on the blessing or miracle but on God. He wants you to enjoy Him and experience fullness.

When we believe in Jesus, our spiritual eyes are opened, and we see Jesus for who He is.

Jesus had compassion for the blind man. He was interested in the man regaining his sight, physically and spiritually. According to John 9:35-39, the man believed in Jesus. This implies that his eyes saw the salvation of God. Jesus is the light of the world; He did not leave the man in the darkness of blindness. He helped him out of darkness and into the light, and God was glorified. This should be our goal too. As Jesus’s disciples, we should bring others out of their darkness and bring them into the light.

YOUTH GAMES AND ACTIVITIES FOR JESUS HEALS THE BLIND MAN

WHAT’S IN THE BOX